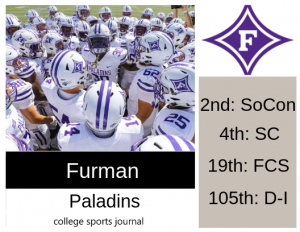 2018 In A Sentence: A yearly competitor for an FCS playoff berth, Furman barely missed out in 2018 after a 6-4 season. The Paladins went 6-2 in conference play, but lost both of their non-conference games: one at Clemson and one at Elon. The biggest blow may have been the game they didn’t play. The Paladins were scheduled to play Colgate, but the game was washed out due to Hurricane Florence that made landfall in the Carolinas. Had Furman played and won that game, they would most likely have been included in the 24 team field.

Biggest Shoes to Fill: In an option offense, the job of the quarterback is to make the right read and get the ball in the hands of the right guy. QB Harris Roberts was the guy making the decisions for Furman in 2018. Despite only throwing the ball 109 times in ten games, Roberts threw 11 touchdowns and only two interceptions with a 68.8% completion percentage. For Furman to have success in 2019 they will have to find a player as efficient and smart as Roberts under center.

Key Player: As a freshman, Bandit DE/LB Adrian Hope burst on the scene for Furman with 15 sacks and five forced fumbles. Hope was fourth (and highest voted defensive player) in the Jerry Rice Award voting, given to the top freshman in FCS. Already in 2019, Hope has been named to the watch list for the Buck Buchanan award. If his sophomore year mirrors his freshman year, Hope will garner many votes for that award as well.

Fearless Prediction: As usual, Furman will challenge for the SoCon title. This looks like a team that could make a deep playoff run if they can find the right guy to play under center.