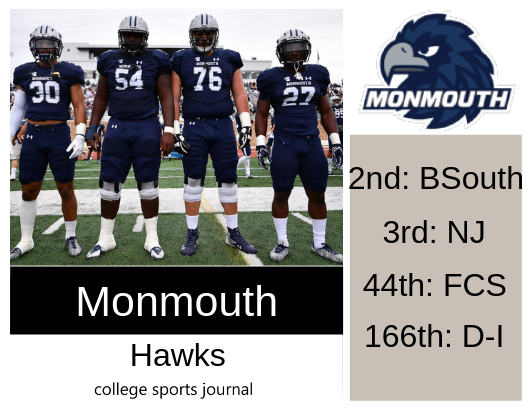 2018 In a Sentence: Monmouth followed up a 9-3 playoff season in 2017 with an 8-3 record in 2018. Unfortunately for the Hawks and their fans, that record was not enough to garner them a playoff berth. The Hawks and head coach Kevin Callahan have quietly been building a good program.

Biggest Shoes to Fill: WR Reggie White, Jr. was far and away the best receiver for Monmouth in 2018. White led the Hawks with 71 catches, 1133 yards and 11 touchdowns, and the go-to guy for the Hawks in 2019 is now camping for the NFL’s New York Giants.

Key Players: QB Kenji Bahar had an excellent season in 2018 with 2626 yards and 20 touchdowns and suffering only 6 interceptions. It will be key for Bahar to have an even better season in 2019. Bahar will be counted on to distribute the targets left behind by Reggie White’s graduation.

Fearless Prediction: Monmouth should have another good season in 2019 but they will have to get over the Kennesaw State hump to win the Big South. The Hawks play Montana in Missoula where a win would be a signature statement for the program – and could be huge down the line if the Hawks are on the bubble for the FCS Playoffs again this year.