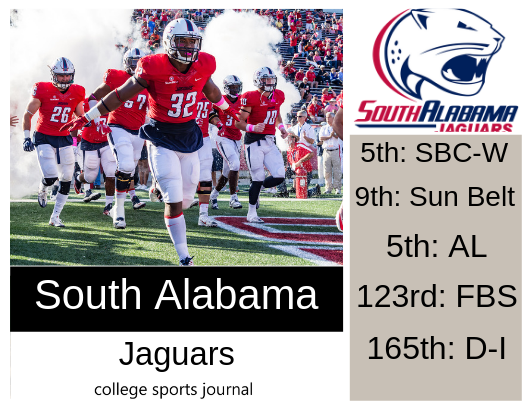 2018 In a Sentence: After a 4-8 season in 2017, first year head coach Steve Campbell replaced the Jaguar program’s first head coach, Joey Jones and went down to 3-9 (2-6 Sun Belt) in his first season at South Alabama.

Biggest Shoes to Fill: Top two QBs Evan Orth and Cole Garvin are gone with all their experience. Sophomore Cephus Johnson is more than ready to make the more run oriented offense under Coach Campbell work. He completed 7-of-19 passes for 120 yards and three scores with a pick in limited action last year.

Fearless Prediction: With only 10 starters returning from a 3-9 team, clearly South Alabama is still much in a building mode in the second season under Coach Campbell. The only position that really looks solid at this point is the defensive line with Tyree Turner , Jordon Beaton and Riley Cole all returning upfront. All other positions need growth and it is hard to imagine that the Jaguars finish much better than the three win total it had in 2018.