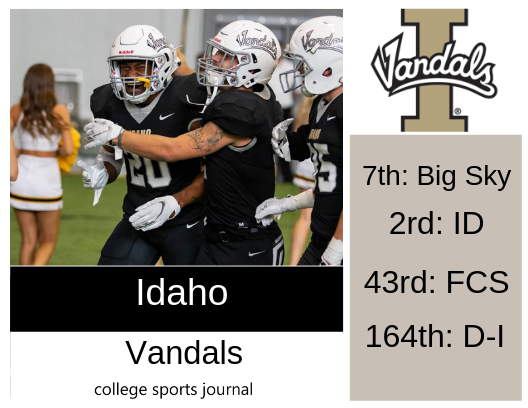 2018 In A Sentence: Idaho had high expectations for “dropping down a level” and coming back to the Big Sky Conference. The Vandals and analysts around the FCS quickly found out that the Big Sky is not a joke and can seriously compete at a high level. What should have been a breeze compared to the FBS level may have awakened the entire program. While they did not finish first the Vandals did compete well and win three out of eight conference games. A close 23-24 loss to Montana State, a playoff team last year, is a strong building block for the 2019 season.

Biggest Shoes to Fill: Players like Kaden Ellis do not come often enough in the Big Sky. Outstanding defensive players in the Big Sky have to work harder than some of the other conferences with such explosive offensive gameplans. His stat line shows why he was drafted this past year in round seven. Kaden had 60 tackles, 16 TFL, seven sacks, three PBU, and a forced fumble. Another gap will be from Isaiah Saunders who was the lead rusher last year with six touchdowns but did not break 1,000 yards. Next man up is Roshaun Johnson, a redshirt sophomore, with only 99 yards last year. The Vandals are starting at square one in the running game with a young position group and a need to produce a large number of rushing yards to be competitive in the Big Sky.

Key Player: There will be a strong focus on Mason Petrino in his senior season and last time playing for his dad. The Vandals will need a strong leader to get them through the season and focused on their goals. Idaho has a strong receiver core and lack of running back experience, so who better to lead the team other than the coach’s son at quarterback in his senior season? The Cinderella story writes itself, but can the Vandals fulfill their prophecy? On the defensive side of the ball, Christian Ellis will be continuing his campaign to join his brother in the pros with team-leading numbers in tackles. The rest of his stats have room to improve to beat his brother, but only being a junior gives him two years to stack his resume.

Fearless Prediction: Idaho will take a step forward, but not a major jump. Penn State and Wyoming will be a brutal way to open the schedule, but those games should prepare the Vandals well for conference play. The first home game during week two against Central Washington will not be a breeze either as CWU has challenged Big Sky teams down to the wire. The tough part of the schedule continues in week four and six when EWU and Weber St. come to Moscow. Fortunately for the Vandals, both are home games and then an average conference schedule follows with Idaho State, NAU, and Montana as the only true tests left. The Big Sky lives up to the “Wild Wild West” reputation as anything can happen, but the Vandals could be looking at a winning season of 7-5 if Mason Petrino and company find success on offense.