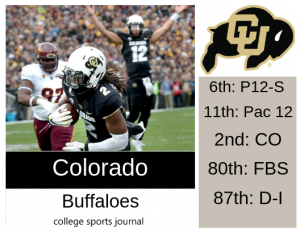 2018 In A Sentence: The Buffs’ have not returned to the dominance they showed in their 2016 season. Since then the records have been disappointing, despite churning out NFL talent left and right. Phillip Lindsay, Chidobe Awuzie, Ahkello Witherspoon, and Juwann Winfree are among the talent CU has produced recently. Stars on NFL teams keep coming from Boulder, but the wins do not. Colorado has the money, talent, and resources to succeed in one of college football’s premier conferences. It just does not show when the powerhouse teams continually tromp the Buffs’ whether in Boulder or not. Washington, Washington State, and Utah seem to be hurdles that are even too steep for Ralphie to jump.

Biggest Loss: Travon McMillian graduated and leaves the Buffs’ in a large hole. His 1,009 rushing yards and 7 touchdowns will be a big hit to the Colorado offense as there is a limited and very young tailback squad for this year. With a lack of experience or resume left at the tailback position, it will put more pressure on Steven Montez to pass and carry the team. Montez was the next leading rusher to follow McMillian with 238 yards and 4 touchdowns. While the Buffs’ look to establish a new face of the rushing game it may take Montez and Laviska Shenault Jr. to head up quarterback runs and end around receiver runs so that the rushers can find their identity.

Key Player: Laviska Shenault Jr. received a spot on the AP 2nd Team All-America preason list. Last season he had 86 catches for 1,011 yards and 6 receiving touchdowns, but he also ran 17 times for 115 yards and 5 touchdowns. Shenault Jr. is a dual threat receiver with an impressive size of 6’2″ 220 lbs. While Steven Montez is an impressive quarterback that will likely have the NFL calling him in the spring, Shenault Jr. possess more raw and undiscovered talent. What that means is Montez is setting himself up to be a good candidate for a late round draft pick, but Shenault Jr.’s ceiling could be even higher. If the two combine to make a great “send-off” season for Montez it will propel both of their NFL stocks and the Buffs’ to a potential bowl game.

Fearless Prediciton: The Buffs’ are in for a huge season start, but will be cut down by PAC 12 power teams in the middle and end of their schedule. The Buffs’ could take a 5-0 start to the season by beating rivals Colorado State, Nebraska, and Air Force, along with two mediocre Arizona teams (Arizona & Arizona State) in conference play. Stumping the success will be brutal road games to Oregon and Washington State where both will offer gritty teams and a hostile environment. Following these rough games the Buffs’ will slay two of the three famous California teams (USC & UCLA), but will fall on homecoming to Stanford. The stingy powerhouses of the PAC 12 will keep Colorado down the rest of the season as the conference runs through Washington and Utah, with Washington State as the conference favorite. While 7-5 may not be enough for a conference title it could put the Buffs in the running for a bowl invitation. A chance for Ralphie and the boys to go bowling would be a great first step for Mel Tucker’s new program.