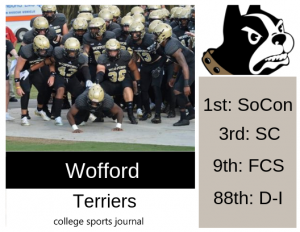 2018 In A Sentence: 2018 marked the first season in 30 years that Mike Ayers wasn’t the head coach. But the Terriers made Ayers proud in the first year under Josh Conklin going 9-4 including a first round playoff win over Elon. The Terriers lost early at Wyoming, but showed they belonged. The season ended in a hard fought 13-10 loss to Kennesaw State.

Biggest Shoes to Fill: RB Andre Stoddard was a tough man to stop in the Terriers triple option offense. Stoddard ran for 913 yards and 11 touchdowns in 2019. He was a tough man to drop for a loss, losing a total of 15 yards among his 156 carries. Wofford will have to find another bruising power back to take over Stoddard’s role, but their past history shows the chances are extremely high that they will find the guy.

Key Player: QB Joe Newman is the triggerman in the Wofford offense. In the triple option, Newman has to make the right decision every time. He generally does in the run game. The Terriers ran for 4,058 yards and 38 touchdowns as a team in 2018 with Newman under center. Where Newman has to improve is the pass game. He completed just under 61% of his passes, which is respectable. However he threw just as many interceptions as he did touchdowns, with eight.

Fearless Prediction: Wofford comes into the season as the favorite for the SoCon title, and they will be there all year. The rest of the conference is getting better, but the Terriers still look like the class of the field.