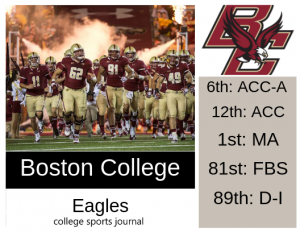 2018 in a Sentence: Football seasons aren’t supposed to end on an “incomplete”, but that’s how the season of the 7-5 Eagles ended when play was suspended thanks to deteriorating weather conditions in the First Responders Bowl. It obscured a surprising 7-5 record, with solid wins over Miami (FL) and Virginia Tech to become bowl eligible.

Biggest Shoes to Fill: DE Zach Allen had 61 tackles, 15 tackles for loss, and 6 1/2 sacks. He was the linchpin of a sturdy defense that loses a lot of starters to graduation.

Key Player: Lanky reshirt junior QB Anthony Brown returns to build on his very successful sophomore season, where he finished the year with 2,121 yards passing and 20 touchdowns. When he’s rolling, the Eagles have a very good offense, but he’s not had the same level of success against the tougher names in the ACC. If he can get some more consistency, watch out.

Fearless Prediction: Boston College loses a ton to graduation on defense, which isn’t exactly a recipe for success in an ACC Atlantic division that boasts Clemson, Syracuse, and Florida State. It feels like this team needs one more year in the oven and a chance for the defense to come together. If they do, another bowl invite could be in the offing.