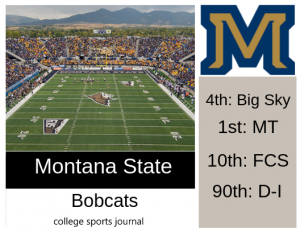 2018 In A Sentence: The Bobcats took a big step forward by reaching the second round of the playoffs. Along the way there was only three bad losses during the season. Included in those losses were blowouts from top ten NDSU and SDSU, and getting outplayed by a scrappy Idaho State team. Bright spots in the season included a three score win over Incarnate Word in playoffs, a third straight win over bitter rival Montana, and winning a narrow game against Western Illinois.

Biggest Shoes to Fill: Grant Collins is a significant loss for Montana State on defense. While the depth of Montana State can hold its own, there is always a worry that replacing senior talent will be easier said then done. The defense did well in all categories, but preventing scores will be pertinent to establishing wins.

Key Player: Bryce Sterk at defensive line will be a necessary force to limit opposing teams rushers and quarterbacks. Sterk tallied up 61 tackles, 17 TFL, and 8.5 sacks on the 2018 season. The blatant fear alone that the 6’5” 265 lbs defensive end poses is enough to morph opposing team schemes around him. With how stacked the Bobcat roster is they will be poised for success. Troy Andersen is another threat teams should watch out for as he can play running back, linebacker, quarterback, and wide receiver. Andersen is likely the most talented “athlete” position player the Big Sky has seen in a long, long time. He can run, pass, tackle, and score. Not many players can do all of those in college.

Fearless Prediction: The beginning and end of the Bobcats schedule will be a rocky road. To kick off the non conference schedule will be an inevitable whooping at Texas Tech, followed by a tough meeting at home versus SEMO. To continue the tough matchups Montana State will travel to Western Illinois for a nail bitter again. Filling out the non conference will be a doable game versus Norfolk State. The beginning of the conference schedule will be realistic wins for Montana State, despite the scrappy lineup. The last two games will test and determine whether or not the Bobcats make playoffs. An uphill challenge of playing UC Davis at Davis, CA will be a marquee match, but does not look good unless the defense improves. And the famous Brawl of the Wild will close out the season. It helps with the game being at Bozeman, but a disgruntled Griz fan base and team will make for a hostile environment, despite the home designation.