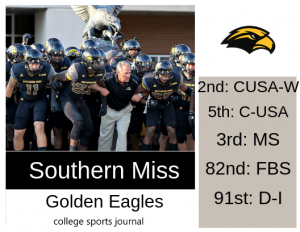 2018 In a Sentence: Southern Miss finished being bowl eligible by finishing last season with a 6-5 overall record (5-3 C-USA) but were not selected despite ending the 2018 campaign winning three of its final four games.

Biggest Shoes to Fill: CB Picasso Nelsn, Jr. was the leading tackler last years for the Golden Eagles with 59 stops, including 4 1/2 for loss. He also has an interception. He signed a college free agent contract in the offseason with NFL’s Jacksonville Jaguars. He is also one of five players lost on a defense that were statistically one of the top squads in C-USA.

Key Player: QB Jack Abraham led the FBS in completion percentage last season, connecting on 73.1% of his passes. He threw for 2,347 yards and 15 touchdowns last season in nine games. He split time with this year’s back-up Tate Whatley, but should be the top option under center this year. The key for him is to stay healthy as he struggled with injuries and also worked on his arm strength as many of his passes were shorter and for the offense to be more explosive, he needs to throw down field more. He will also need to adjust to new offensive coordinator Buster Faulkner, who comes to USM from Arkansas State where he had the same position. Faulkner was Coach Hopson’s second choice it seemed as he originally was the maligned former Baylor coach Art Briles.

Fearless Prediction: If Abraham can stay healthy and improve on his 2018 season, Southern Miss will be one of the favorites in the C-USA West this year. Navigating an early-season schedule, which includes road games against SEC opponents Mississippi State and Alabama, will be paramount. The Golden Eagles will fall just short of the division title but should improve on its win total and get back to a bowl game.