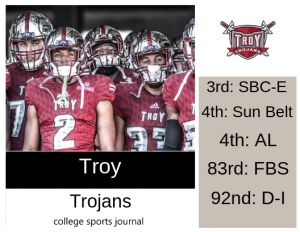 2018 In a Sentence: After a three-year run that produced 31 wins, a Sun Belt title and several high-profile upsets including a 10-3 (7-1 SBC) and Dollar General Bowl win over Buffalo, Coach Neal Brown left Troy for the Big 12’s West Virginia.

Biggest Shoes to Fill: LB Tron Folsom led Troy in tackles each of the last two seasons. He has 81 tackles, eight tackles for loss, six quarterback hurries, two sacks and two interceptions in 2018 as he earned second-team All-Sun Belt Conference honors. He decided to go to the Mountain West’s Colorado State as a graduate transfer this year.

Key Player: RB BJ Smith will need to be a steady star to work around especially in the running game because of the coaching change. The now-senior is coming off an All-Sun Belt campaign when he rushed for 1,186 yards and 13 scores averaging over five yards per carry.

Fearless Prediction: One would think that the Trojans due to the number of seniors and the high transfer count, along with a new coach at the healm would have a rebuilding season. But Troy has a number of talented players that will see their first action this year. There might be a small dip but not great. The Trojans will be challenging for the Sun Belt title again and have Appalachian State and Georgia Southern at home this year. Expect a couple game drop but still an eight-win season for Troy and another bowl game.