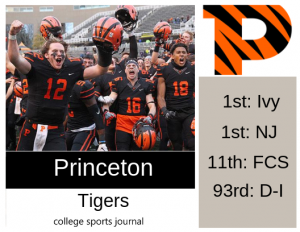 2018 In A Sentence: 10-0 Princeton had a year to remember in 2018, clinching the fourth outright Ivy League title in program history, and the first since 1995. It was also the program’s second 7-0 Ivy season since league play officially began in 1956, and the 13th 7-0 season in Ivy League history, and the first since 2014. Though they had some close defensive games, they really brought the cheese on offense – they were the highest-scoring offense in Ivy League history.

Biggest Shoes to Fill: There are many. QB John Lovett was a special player for the Tigers. The dual-threat QB scored a ridiculous 31 touchdowns in 10 games, 18 through the air and 13 on the ground. The NFL’s Kansas City Chiefs snapped him up as an athlete – they’re working him out as a pass-catching tight end. WR Jesper Horsted, his top receiver from last year, is also in an NFL camp, and three of the Tigers’ leading tacklers are all lost to graduation.

Key Player: 6’4, 255 lb TE Graham Adomitis might have been a forgotten weapon on Princeton’s powerful team last season, but he was the best blocking tight end in the Ivy League and a decent receiver from that position, notching 10 catches for 61 yards and a TD. Don’t be surprised to see him be the next Princeton player to be signed by an NFL team.

Fearless Prediction: Make no mistake: though Princeton graduates a ton of players, there is little doubt that they will be contending for the Ivy League title again in 2019. A feather-light out-of-conference schedule will set up a challenging second half of of the year against Yale, Dartmouth and Harvard. Can they go undefeated again? There’s a very decent chance the answer is “yes”.