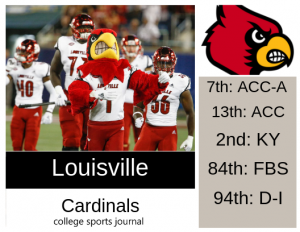 2018 in a Sentence: It was bad. After two wins against teams they were expected to beat, Indiana State and Western Kentucky, the Cardinals would lose all of their remaining games, causing the firing of head coach Bobby Petrino near the end of last season. Before Eastern Kentucky, Morehead State and every other Division I college football program rushed to get Louisville on the schedule, the Cardinals hired Scott Satterfield away from a very successful Appalachian State program to take Louisville out of their tailspin.

Biggest Shoes to Fill: There were many reasons for Louisville’s problems last season, but S Dee Smith wasn’t one of them. He led the team in tackles with 73 and will be missed on a defense that is going through a major retooling.

Key Player: It seems like a lifetime ago that QB Lamar Jackson – remember him? – was the QB at Louisville. In order for Louisville to develop the next Lamar Jackson, they’ll need to start with much better offensive line play, and for that the Cardinals have an NFL-caliber blind side tackle in 6’7, 355 lb OT Mehki Becton, Jr. It doesn’t seem like too tall an order for Satterfield to build around this behemoth and carve together an offense that will score points once again.

Fearless Prediction: The good news, Cardinal fans, is that you won’t have the same feeling of existential dread you had watching last year’s team. The bad news is that while you might eke out a few more wins, bowl eligibility and getting to the top half of the ACC seems like a multi-year project.