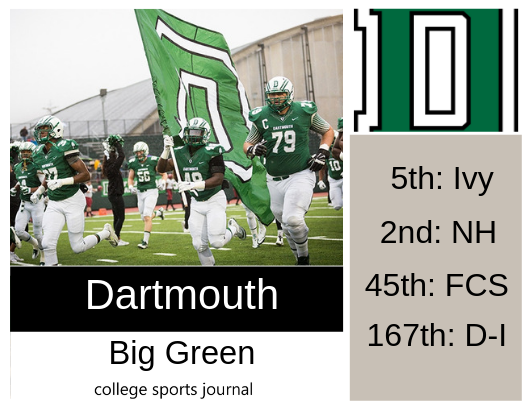 2018 In A Sentence: It was an epic battle of unbeatens when Dartmouth headed to play longtime rival Princeton in late October. The Big Green’s 14-9 loss in that game would be Dartmouth’s only blemish on the year – a terrific 9-1 season that unfortunately didn’t result in an Ivy League title.

Biggest Shoes to Fill: Head coach Buddy Teevens doesn’t only have one set of shoes to fill, he has a whole shoe store full of shoes to replace. 4/5ths of the offensive line, their starting running back Rashaad Cooper, and DL Rocco DiLeo, one of the key cogs of the Big Green defense.

Key Player: Fortunately for Big Green Nation one of the best overall athletes in the Ivy League, CB Isaiah Swann, returns in the Dartmouth secondary for his senior season. Last year’s Ivy League Defensive Player of the year had more interceptions in 10 games (9) than any other player in Division I playing as many or more. The 6’0, 190 lb corner will definitely be on the radar of NFL scouts this fall.

Fearless Prediction: Dartmouth lost a lot to graduation this offseason, and in a league as top-heavy as the Ivy League that could be the difference between a run at the title and a season hovering around .500. If Dartmouth’s offensive line can gel quickly, their next meeting against Princeton at Yankee Stadium might also have Ivy League title implications this year as well. With really tough early tests against Colgate, Yale, Penn and Harvard, though, there is zero margin for error.