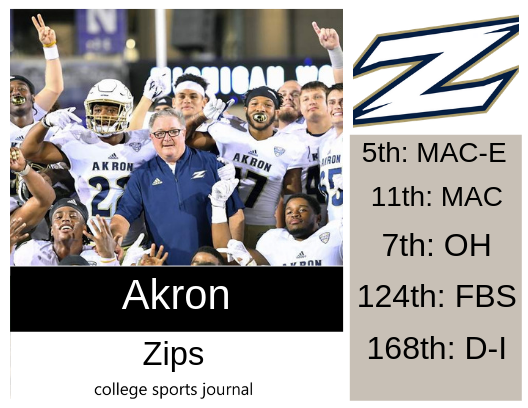 2018 In a Sentence: The Zips were bitten hard by the injury bug in 2018 to finish just 4-8 overall (2-6 MAC) and let long time Coach Terry Bowden go following the season.

Key Player: S/CB Alvin Davis Jr. is the Zips’ top returner on defense and look to fill for Gilbert. He was a First Team All-MAC performer as a junior in 2018 after leading the conference with four interceptions, which he had 149 total yards and two touchdowns on the returns. Davis Jr. also added 77 tackles, three pass breakups, two forced fumbles and two fumble recoveries. This spring, Davis was moved to corner back so how he performs there will really be telling.

Fearless Prediction: The Zips last year ranked 11th overall in the MAC in scoring and overall offense, last in rushing offense and last in third-down conversions, not surprisingly leading to also ranking last in time of possession. With new Coach Tom Arth, he likes to run a pro-style offense and with QB Kato Nelson coming off being the the team’s second-leading rusher a change of offenses may not fit Nelson’s strengths. This will very much be a transition year with the new head man and look for this team to at best to equal last year’s win total of four.