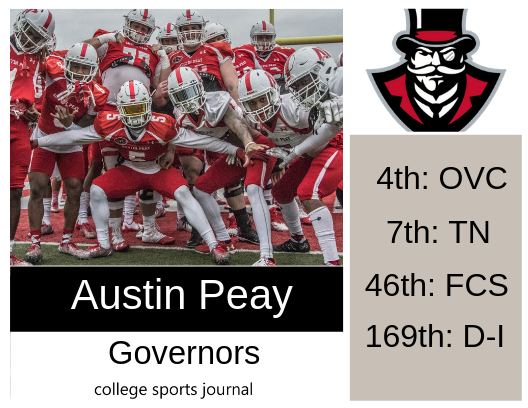 2018 In A Sentence: Austin Peay had an uneven 2018 after entering the season with high expectations following a 2017 season that saw them go 8-4. The Governors struggled in conference play, where they went 3-5.

Biggest Shoes to Fill: Former head football coach Will Healy made people take notice of the Austin Peay football program in his three years on the job. After going winless in 2016, Healy retooled and guided the Governors to an 8-4 record in 2017, narrowly missing out on the FCS playoffs. At the conclusion of the 2018 season, Healy accepted the head coaching position with the Charlotte 49ers.

Key Player: After splitting signal calling duties over the last two years, QB Jeremiah Oatsvall was named the starter by new head man Mark Hudspeth. Oatsvall threw 20 touchdowns against 10 interceptions. With consistent playing time, he should be able to improve in 2019.

Fearless Prediction: Austin Peay was a hot name as a potential sleeper in 2018, but a 5-6 season took some shine off of that outlook. The Governors will again look to be a sleeper once again in 2019. Peay fans might think they can jump back to their 2017 level, however fourth in the OVC looks to be their ceiling for this year.