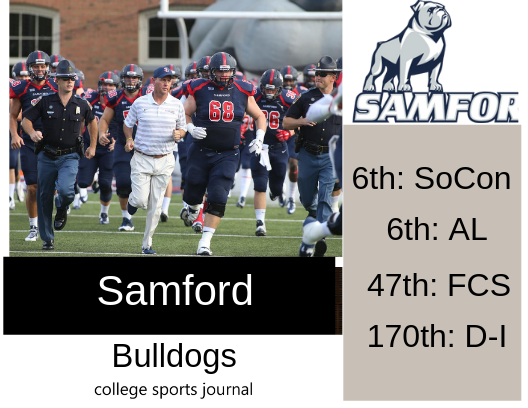 2018 In A Sentence: Samford came into the 2018 with high expectations, and was the talk of the FCS after nearly beating Florida State. However, the wheels came off and the Bulldogs lost four straight games before finally getting back on track at the end of the season. The losing streak was too much to overcome for Samford to make the FCS Playoff field.

Biggest Shoes to Fill:This is one of the easier picks of the year. The Bulldogs lose the all-time FCS leader in passing yards (14,584) and 2018 Walter Payton Award winner QB Deviln Hodges. In his senior year, Hodges broke Steve McNair’s 24 year old record for passing yardage while completing 70% of his passes for 4,253 yards and 32 touchdowns. Also departing after a huge senior season is stud WR Kelvin McKnight, who was Hodges’ go to guy with 100 catches for 1453 yards and 9 touchdowns. This is not the type of production that is easy to replace. Key Player: Its always hard to follow a legend. Coach Chris Hatcher is going to have to find a quarterback who can run his offense. You don’t replace players like Hodges and McKnight, so the defense will have to be better, as will the running game. The QB battle should rage on during preseason camp between USF transfer QB Chris Oladokun and junior QB Liam Welch as to whom might get the bulk of snaps under center on opening day.

Fearless Prediction: Samford is primed for a step back in the Southern Conference. The Bulldogs look to be an also-ran for 2019, but could strike lightning if they can find the right combination on offense. First, Hatcher will need to find his quarterback.