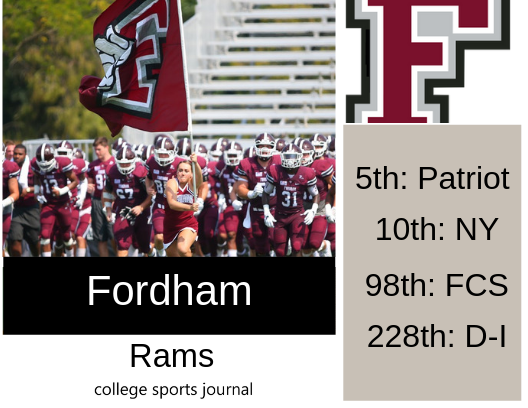 2018 In A Sentence: A 70 yard interception return for touchdown allowed the Rams to finish the year on a high note beating Bucknell 17-14, putting the Rams at 2-9 on head coach Joe Conlin‘s first year as Fordham’s head football coach.

Biggest Shoes to Fill: Over his career, TE Isaiah Searight made 89 receptions for 1,119 yards with ten touchdowns. He tied the school record for career touchdowns by a tight end and is just the fourth Ram tight end in school history with more than 1,000 career receiving yards. He signed with the NFL’s Tampa Bay Buccaneers.

Key Player: Fordham’s defense improved week to week during the 2018 season, and in large part was due to the development of sophomore LB Glenn Cunningham. The Glastonbury, Connecticut native registered an eye-popping 21 1/2 tackles for loss and led the Rams in tackles with 92. As he continues to get better, it seems like Fordham’s defense has the potential to get scarier and scarier for Ram opponents.

Fearless Prediction: The Rams will be an interesting team to watch in 2019. The potential is there to make a run at the Patriot League title, aided by five out-of-conference games to start the year, including winnable games versus Bryant, Central Connecticut State and Richmond. But they’ll have to replace some key members of the offense, including their two most prolific pass-catchers in Searight and WR Austin Longi. If their offense comes together, they could be scary. If it doesn’t, yet another sub-.500 season looms.