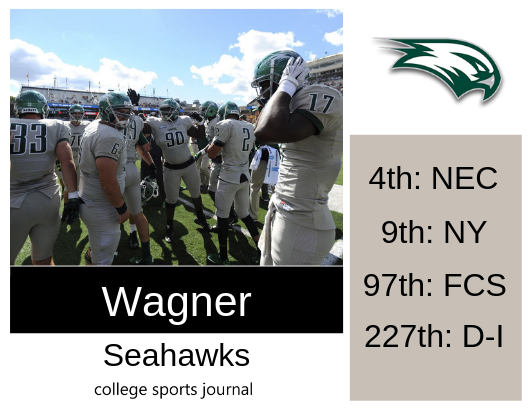 2018 In a Sentence: A tough, brutal early stretch of the schedule saw the Seahawks limp to a 1-5 record, though they would win their final two games against Bryant and Robert Morris to achieve a 4-7 record.

Biggest Shoes to Fill: RB Ryan Fulse was an electrifying back for the Seahawks, one of the top rushers in FCS all last season. His 1,946 all-purpose yards and 14 TDs won’t be easy to replace. Key Player: Last season, Wagner had three different QBs line up under center – none of whom are returning. Former FIU QB Christian Alexander, who led the Panthers to a Bahamas Bowl win in 2018, transferred to Staten Island to play his final year of eligibility for the Seahawks. With Fulse’s departure, Alexander will be expected to be the man from Minute 1 in preseason practice. Can he mold a winning offense?

Fearless Prediction: Wagner’s new quarterback, and schedule, seem to dictate that they will either be challenging for the NEC Championship, or spending time yet again in the NEC cellar, with no in between outcome. If they have three wins by the time they head to Pittsburgh to play Duquesne, they might have a chance to make some noise in the NEC. If they don’t, expect another losing season.