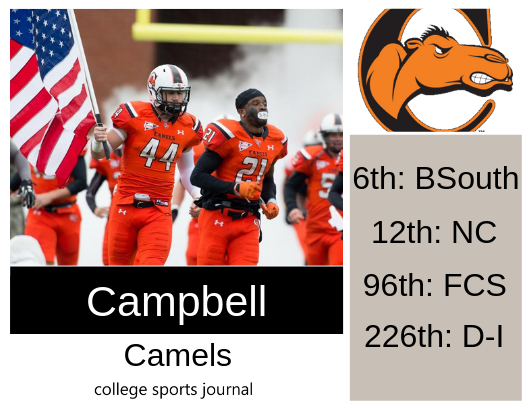 2018 In a Sentence: Campbell used a modest non-conference schedule to achieve a winning season in 2018, finishing 6-5. When the Camels got into Big South play, they struggled, going 1-4 in conference play. While they did not play many close games, a winning season has to be view as a success for the young program.

Biggest Shoes to Fill: LB Jack Ryan played like a character in a Tom Clancy novel last year, racking up 89 tackles and 3.5 tackles. Ryan completed his college career with 232 total tackles, good for second in school history. His absence will create a large hole in the Camel defense.

Key Players: QB Daniel Smith had a solid sophomore season passing for 1582 yards, rushing for 668 yards and a combined 26 touchdowns. The dual threat quarterback will be looking to improve on those numbers to help elevate the Camels in the Big South.

Fearless Prediction: Campbell does not have much of a chance to make the playoffs, but they have a great chance at their second consecutive winning season with a well thought out non-conference schedule. If they can get to .500 in conference, the Camels will earn a winning record.