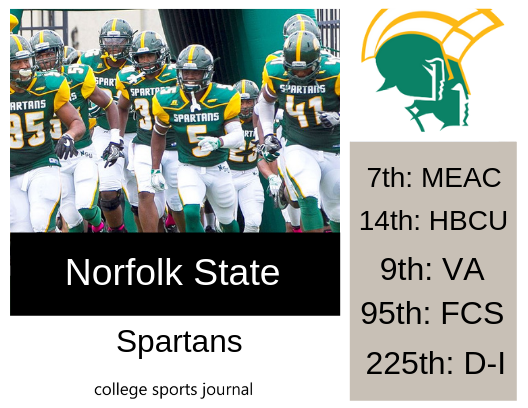 2018 In A Sentence: Another year, another 4-7 year for the Spartans. This fourth consecutive 4-7 season came despite a very promising 3-1 record to start, the only loss an understandable storm-shortened loss to James Madison 17-0. The Spartans then lost the magic, losing six of their last seven games.

Key Player: The only word that can describe junior QB Juwan “Pootie” Carter is “mercurial”. Suspended for one game against JMU after kicking an opposing player, he displayed flashes of brilliant talent in wins against Delaware State and Howard (a combined 7 TDs, 0 interceptions) and frustrating underachievement in losses versus Savannah State and North Carolina Central (a combined 0 TDs and 4 interceptions). If NSU is to have a winning record this year, good Pootie is going to have to make more appearances than bad Pootie.

Fearless Prediction: The Spartans brutal out-of-conference schedule featuring road games against FBS Old Dominion, FBS Coastal Carolina and Big Sky contender Montana State are brutal, especially since MEAC title contenders Florida A&M and North Carolina A&T loom directly afterwards, though the Spartans face both at home. That two game stretch will likely determine whether Norfolk State will have possible Celebration Bowl (or postseason) dreams, or whether a fifth consecutive 4-7 season could be in the offing.