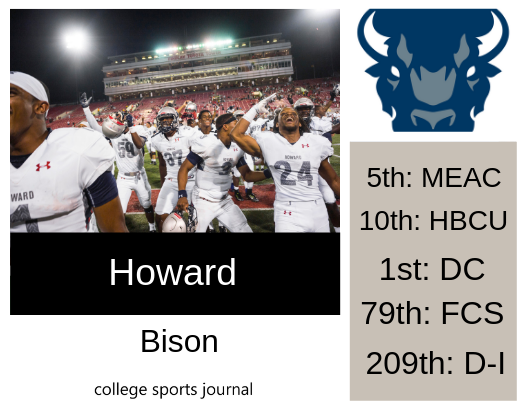 2018 In A Sentence: The Bison had very high expectations going into the season, but stumbled multiple times in MEAC play to fall to a 4-6 record. After the season, head coach Mike London was hired away by William and Mary, and Michigan offensive analyst Ron Prince was hired to replace him.

Biggest Shoes to Fill: The Bison in 2018 were a very young team with underclassmen manning most of the skill positions, but one are where Howard had 5th year talent was on the offensive line, where C James Holman and OL Tyler Shadrach were a key part of the offense.

Key Player: Brother of QB Cam Newton of the Carolina Panthers, Howard QB Caylin Newton continues to excel at the helm of the Bison offense, amassing 3,133 total yards and 26 total touchdowns last season. Though the numbers look great, Caylin is still only a junior in 2019, and will need to continue to work on the little things that take his game from “good” to “great”, like sustaining more drives and converting more 3rd downs. But he looks like he will continue to make tremendous strides towards eventually playing on Sundays if he can keep this up.

Fearless Prediction: London’s departure couldn’t come at a worst time for Howard, but new head coach Ron Prince has been left a couple of Lamborghini’s in the garage in Newton and the rest of his young skill players. How far the Bison can roam, though, will depend on the development of their defense. If Howard’s D can put the Bison in fewer shootouts, and Prince can continue Newton’s development into a superstar, Howard could be looking at a Celebration Bowl berth. But that’s an awful lot of “ifs” in an increasingly tough upper half of the MEAC.