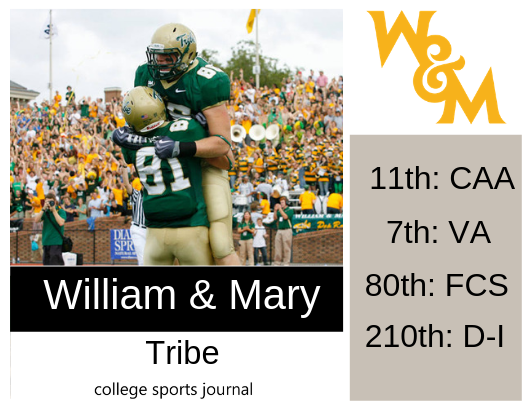 2018 In A Sentence: In August 2018, long time head coach Jimmye Laycock announced that his 39th season would be his last. William and Mary sent him out with a 4-6 record, which is not what they were looking for. The highlight of the season was a victory of eventual CAA champion Maine, the Black Bears only conference loss of the season.

Biggest Shoes to Fill: On an offense that did not have much success, WR DeVonte Dedmon was a bit of an exception. Dedmon led the Tribe with 40 catches for 605 yards and six touchdowns. The offense scored only 14 touchdowns on the season.

Key Player: Sophomore QB Shon Mitchell was a highly regarded recruit who chose to stay close to home by choosing William and Mary. The Tribe needs him to step up and be the guy under center this year. He has the ability to create with his feet as well. New head coach Mike London will need him to be significantly better for the Tribe to improve their record in 2019.

Fearless Prediction: London knows what it takes to win in the CAA, winning the National Championship at Richmond in 2008. His arrival should spark the Tribe to climb a couple rungs in the CAA this year.