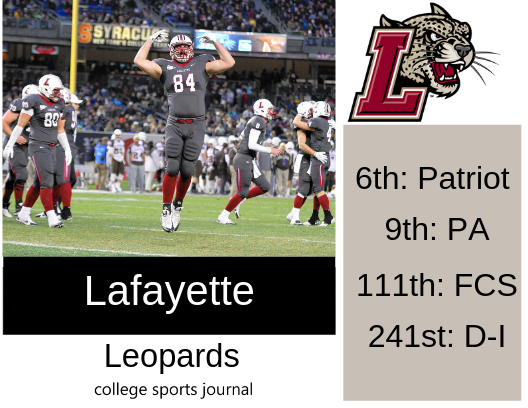 2018 In A Sentence: Going into November, hopes were high that the 3-5 Leopards would turn the corner and do enough to beat their archrival Lehigh in the final game of the season. Instead John Garrett‘s team would lose to Holy Cross, Army and their Rivals to close out a disappointing 3-8 season.

Biggest Shoes to Fill: LB Jerry Powe was a defensive force, with 67 tackles, 5 tackles for loss, and 2 sacks. He was a critical part of the Lafayette defense that Garrett will have to replace.

Key Player: DE Malik Hamm was a revelation in Lafayette’s defensive line rotation last season as a freshman, notching 58 tackles, 15 tackles for loss and 8 1/2 sacks. Leopard Nation will be itching to see how he continues to develop on Lafayette’s ever-strong defense.

Fearless Prediction: After back-to-back 3-8 seasons and back-to-back losses to Lehigh, Lafayette fans are restless. As ever, Lafayette’s defense should be one of the best in the Patriot League, but it’s the offense that has kept the Leopards from advancing out of the league cellar. Improvement in year 3 of the John Garrett era will require the Leopards to vastly improve in that area – they were ranked 118th out of 124 teams in total offense last year.