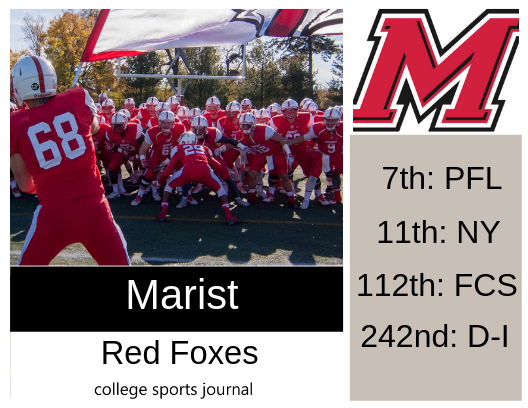 2018 In A Sentence: The Red Foxes had a chance to end the year with a winning record, but a 31-14 loss to PFL champions San Diego doomed Marist to a 5-6 record. Marist went 5-3 in Pioneer League play, but went 0-3 outside their conference schedule.

Key Player: Fortunately for Red Fox fans, Christian’s replacement might already have been warming up in the bullpen. WR Anthony Olivencia, who had 661 yards receiving and 2 TDs last year, should seamlessly step into Christian’s footsteps as the go-to receiver.

Fearless Prediction: Despite Olivencia’s return, Marist sorely needs to do a better job taking care of the ball (25 giveaways) and the Red Foxes also need more stability at quarterback (three different QBs headed Marist’s offense last year). Until they coalesce around one QB and reduce turnovers, Marist seems destined again for a season around .500 at best.