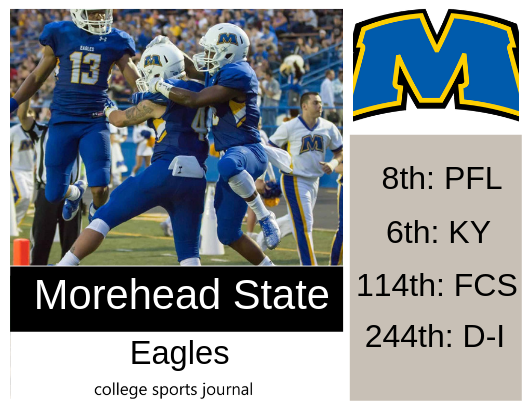 2018 In A Sentence: The Eagles yielded a staggering 6 touchdowns a game en route to a 3-8 season, giving up 40 or more points in seven of eleven contests. In their two Pioneer Football Conference wins, the defense only yielded 28 and 24 points respectively against Davidson and Valparaiso.

Key Player: The Eagles’ next generation of offense is likely to be built around redshirt sophomore RB Jovan Smith, who integrated seamlessly into the Morehead State attack last year and rushed for 521 yards and seven touchdowns on 88 attempts. He’ll be looking for more than the two 100 yard games he secured rushing last season.

Fearless Prediction: A lighter schedule at the beginning of the year will be helpful for Rob Tenyer and his Eagles adjust to life without Lawson Page and try to fix the defensive struggles that plagued them last year. A homecoming game against Butler in late October will be a very good litmus test as to whether Morehead State will be contenders or pretenders down the stretch in the Pioneer League title chase.