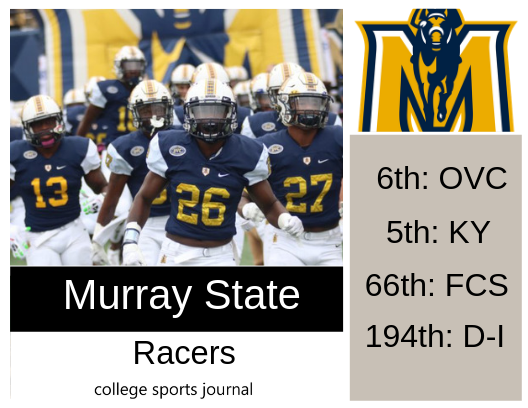 2018 In A Sentence: Murray State lost all three of their non-conference games, which sealed their fate in 2018. In the Ohio Valley, the Racers were 5-3 including one of the most improbable comeback victories and crazy plays of the football season. In their next to last game against Southeast Missouri State, the Racers trailed 31-0 late in the first half before rattling off 34 straight points to take the lead with just under two minutes left in the game. However, SEMO scored what they thought was the winning touchdown with 20 seconds left. But, SEMO decided to squib the kickoff, but Murray State returned the kick for the game winning touchdown.

Biggest Shoes to Fill: LB Quincy Williams was a tackling machine in 2018 with 111 tackles to lead the team. Williams had 9.5 tackles for loss and 2 interceptions, both of which went back for 80-plus yard touchdowns. The Racers also lose DL Kenney Wooten, who notched 42 tackles, 10.5 sacks and 8 quarterback hits.

Key Player: Head Coach Mitch Stewart has a tall task in front of him as he has to replace his two best defensive players, top two quarterbacks, and his top running back. The Racers do get back their top receiver from 2018, WR Malik Honeycutt, who had 29 catches for 477 yards and four touchdowns. If Stewart cant find the right combination of players around him, however, it will be a long season for Murray State.

Fearless Prediction: The college basketball world was enamored with Ja Morant as he led the Murray State basketball team to the tournament before becoming the #2 overall pick in the NBA. Unfortunately, the football program does not have a similar transcendent star to carry them through 2019 in what promises to be a long season for the Racers.