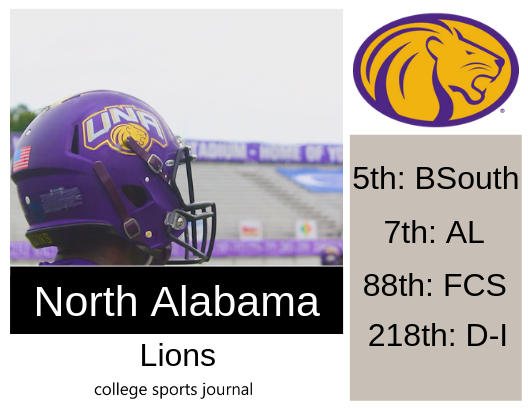 2018 In a Sentence: The Lions finished 7-3 in a schedule split between Division I and Division II. North Alabama went 3-2 against FCS teams last year. In 2019, they join the Big South, play an FCS schedule, and continue their transition to full Division I status.

Biggest Shoes to Fill: North Alabama did not have many impactful seniors as they are continuing their transition to FCS. Their biggest hole to fill will be the grind of full FCS schedule versus a Division II schedule. The Lions start with a tough out of conference slate, which includes three potential playoff teams (Western Illinois, Montana and Jacksonville State) before jumping into Big South play.

Key Players: QB Christian Lopez had very good 2018 season, with 2184 yards passing and 14 touchdowns against only two interceptions, along with a completion percentage of just under 60%. Lopez will have to continue to be even more efficient, especially against the Lions’ first four opponents. If he continues to make strides forward, the senior could put himself in the running for conference honors.

Fearless Prediction: North Alabama looks like mid-pack Big South team that could end with a winning record. Coach Chris Willis is building a good program in talent-rich Alabama so look for this team to win the conference in the next two years.