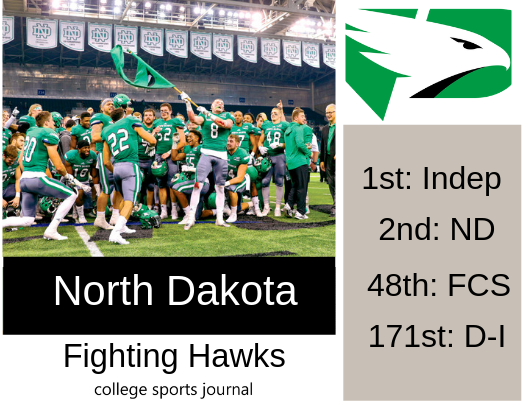 2018 In A Sentence: UND moved from the Big Sky Conference to the Independent ranks starting last season and while still playing a predominant Big Sky schedule, the Fighting Hawks slipped to 6-5 after making the FCS playoffs in 2017.

Biggest Shoes to Fill: RB John Santiago was a three-time All-American selection and departed UND as one of the premier players in program history. He amassing over 3,700 rushing yards and 6,500 all-purpose yards to place third and second, respectively, all-time in program history.

Fearless Prediction: While missing a star in Santiago, UND still returns a total of 17 starters when counting all three areas of the ball. This will be UND’s last season as an Independent before joining the Missouri Valley Football Conference next year. UND plays five teams that made the FCS playoffs last year so it will play one of the sub-division’s toughest schedules. With the experience coming back, UND will likely outpace the six-win total from a season ago and very well could challenge if it gets a few breaks for a playoff spot.