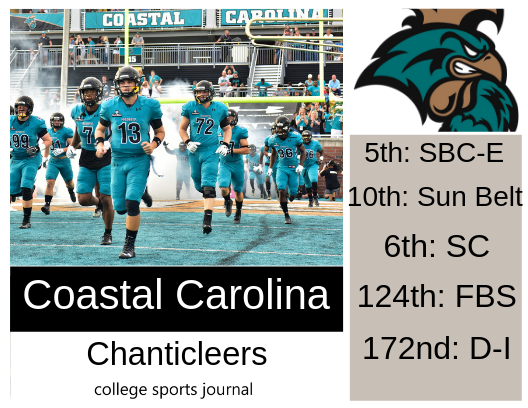 2018 In a Sentence: Coach Joe Moglia, 69, returned to the team a little over a year ago from a five-month medical sabbatical that was taken to treat a condition that was causing inflammation in and damage to his lungs to led the team to a 5-7 (2-7 Sun Belt) record. He stepped down after the season.

Biggest Shoes to Fill: QB Kilton Anderson decided to graduate transfer for his final season of eligibility to FCS William & Mary. He led the team with 1,010 passing yards last season with eight touchdowns. He was the also the third-leading rusher on the year with 251 rushing yards on 56 carries.

Key Player: DE Tarron Jackson will need to step-up even more now that his defensive line mate Jeffrey Gunter will not be on the other side,. He will now beg the main focus for everyone’s blocking scheme. He put together a good sophomore campaign with 58 tackles with three sacks and 11 tackles for loss.

Fearless Prediction: The Chanticleers started out just fine with a 5-3 start, but collapsed over the final four games to miss out on bowl eligibility. Coach Chadwell, who was the interim head coach in 2017, now takes over full time. The now former CCU offensive coordinator will need to find a new quarterback this fall. Coming off four straight losses and a lot of open question marks coming into this season, this team will likely at best equal its five win total from a season ago.