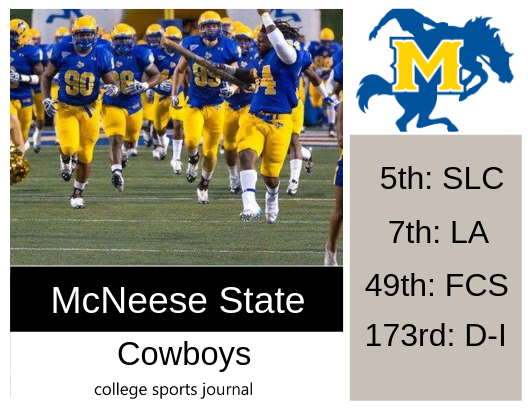 2018 In a Sentence: McNeese State came out of the gates fast, starting the season 5-1 before losing 4 of their last 5 games to miss out on the playoffs. The Cowboys played stingy defense and tried to grind out points on offense, but eventually an ineffective offense that only scored 21 points per game was their undoing.

Biggest Shoes to Fill: LB BJ Blunt’s presence on the McNeese defense was felt on nearly every play. Blunt turned in an excellent senior season with 102 tackles, and astounding 20 for loss and 11 sacks; all of which led the Cowboys. Blunt also blocked a kick in special teams play. He signed with the Redskins as an undrafted free agent in April.

Key Player: QB Cody Orgeron is the most likely candidate to take over for James Tabary in 2019. Orgeron has football bloodlines as he is the son of LSU head man Ed Orgeron. The Cowboy offense has to be significantly better in 2019 if they want to be a playoff team and that starts with solid quarterback play.

Fearless Prediction: McNeese started off fast and seemed to be a lock for the playoffs at the halfway mark. But a poor finish to the season kept them at home over Thanksgiving weekend, watching the action from the couch. Without huge improvement on offense, McNeese is looking at another year on the outside looking in.