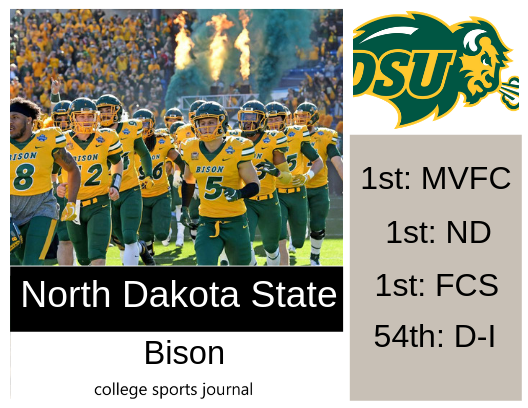 2018 In A Sentence: NDSU won its seventh national title in the past eight years with its win over Eastern Washington in the National Title Game and did it with its second undefeated record team in that span (15-0, 8-0 MVFC). Coach Chris Klieman coached his last game with the Bison after being named the new head coach at the Big 12’s Kansas State.

Biggest Shoes to Fill: QB Easton Stick had a a 49-3 record as a starter to become the all-time winningest QB in Football Championship Subdivision history, passing former Bison Brock Jensen (48 wins). He finished as North Dakota State’s all-time record holder in passing yards (8,693), passing touchdowns (88) and total offensive yards (11,216) while ranking No. 2 in pass attempts (980) completions (598) and efficiency rating (159.5). Stick was drafted in the NFL’s fifth round by the San Diego Chargers this past spring. NDSU has announced that redshirt freshman Trey Lance will be the next starter for the Bison and will have some very big shoes to fill.

Key Player: LB Jabril Cox led the Bison in tackles as a redshirt freshman and sophomore the past two years and was named the MVFC Defensive Player last year. Now with some departures around him, the linebacker is the undisputed leader of the defense despite being just a junior. North Dakota State was third among all FCS teams in scoring defense last year, allowing just 12.6 points per game and will look to duplicate this stat this year. Cox will move from the Sam to the Will linebacker position, meaning he’ll be asked to cover more ground so this is a key switch to possibly the most talented FCS defensive player in the country.

Fearless Prediction: Coach Matt Entz takes over the reigns of the FCS team with the most national titles in history. He was the prior NDSU defensive coordinator and has just seven full-time starters from last year’s. But as was seen the last time NDSU had a coaching change with Craig Bohl being replaced by Klieman and a team needing to replace a large number of starters off an undefeated national title team, this team knows how to reload with talent. Expect a loss or two for the Bison in the regular season but will again be a high seed in the FCS playoffs and get back to Frisco for the FCS title game again.