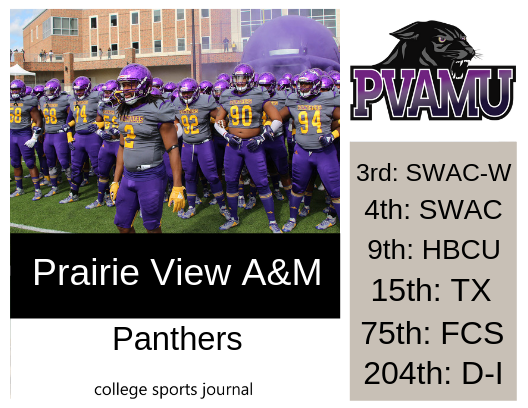 2018 In A Sentence: A tremendous 3-3 record to start the year, with a win against hated rival Grambling and close losses against Sam Houston State and two FBS teams, put the Panthers in a great position to make a run at the SWAC Championship Game and the Celebration Bowl. But a 3 game skid against Southern, Alcorn State and Jackson State meant Prairie View would end up with a 5-6 record overall.

Biggest Shoes to Fill: DE Willie Green came out of nowhere to have a tremendous senior campaign for the Panthers, notching 62 tackles including 13 tackles for loss. He’s one of three graduating seniors that led Prairie View in tackles; LB Issac Claiborne and LB Anthony Stubbs were the others.

Key Player: Almost all of Prairie View’s offensive skill players return, but head coach Eric Dooley is looking to transfers to try to rebuild an offensive line and defense that lost so many players. DT Jalen Jackson, who played offensive lineman at Purdue but was buried on the depth chart, could end up being a key part of the Panther defensive plans anchoring the center of the defensive line.

Fearless Prediction: A repeat of 2018’s amazing early stretch seems unlikely given the brutal stretch of early games against University of Houston, FCS playoff contender Nicholls, SWAC Championship contender Alcorn State, a Grambling State team geared for revenge, and Southern, who blanked the Panthers last season. The only way Prairie View can achieve a winning season is to upset one of these five teams – a tall order with so many pieces to replace from last year’s team.