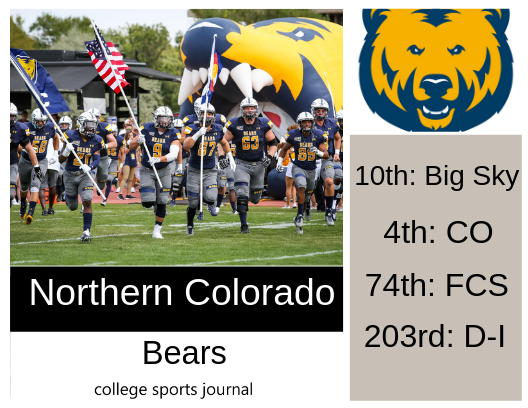 2018 In A Sentence: Few teams have seen as many setbacks as the Bears. Northern Colorado showed a glimpse of success with two 6-5 seasons two years ago, but have returned to the bottom of the Big Sky. While still a competitor in the FCS, the Bears have disappointed in conference play. Despite their troubles, Northern Colorado has still produced all-conference and NFL caliber players.

Biggest Shoes to Fill: Alex Wesley is a two in one thousand player as the only other Bear to gain two thousand yards receiving was Vincent Jackson. The young receiver core of Dontay Warren, Noah Sol and Willie Fairman have the raw talent and athleticism to surprise conference opponents. Another question mark will be if the graduate transfer of starting corner Marshaun Cameron will leave a gap in the secondary.

Key Player: Jacob Knipp is the six-year veteran quarterback who will not quit. Even after three years of season ending injuries, Knipp still hopes to shine as a top ten FCS quarterback. If Knipp gets pressured or hurt, look for Milo Hall to pick up the slack as the starting running back from University of Wyoming.  Hall showed a lot of promise last year, and as the lead back could take a step forward in progress.

Fearless Prediction: It may be a fearless prediction, but the Bears will continue to not be last in the Big Sky. In fact, they will finish as high as ninth in the conference if the season goes well. The front end of the schedule is a rough ride, but looking ahead to the second half of conference play it looks like a realistic schedule to succeed.