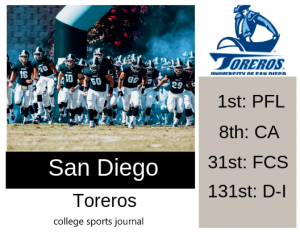 2018 In A Sentence: The Toreros finished 2018 with a 9-3 overall record and a 8-0 mark in the Pioneer Football League to win their third straight PFL title outright and fifth straight including ties but USD did bow out a round earlier than the prior two seasons in the playoffs (a 49-30 first round loss at Nicholls).

Biggest Shoes to Fill: QB Anthony Lawrence started the last 47 straight games for USD. He owns school records for completions, passing yards, and passing touchdowns. He also is the all-time PFL leader in passing and a three-time All PFL performer. To say that he was a huge part of the Toreros success is understating things a little.

Key Player: WR Michael Bandy had a breakout sophomore season last year in being named to several All-American squads after leading the FCS with 1,698 yards. He had nine 100-yard games on the season including three of over 200 yards receiving and had 14 total receiving touchdowns. He will need to be a spark on the offense that will see a new quarterback throwing to him (likely redshirt senior Reid Sinnett).

Fearless Prediction: If there is a year to be down, this is it for USD, since the need to find a replacement for Lawrence under center. But there is still loads of talent on this team and may need to have its defense carry the Toreros for the early going (ranked 9th in overall defense last year). Look for USD to perhaps start a little slow (with out-of-conference games at Cal Poly and hosting UC Davis and Harvard) but then pick it up in the PFL play and hoist another PFL crown.