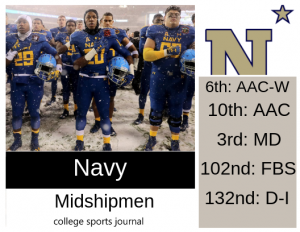 2018 In a Sentence: It was another disappointing year for the Midshipmen with a 3-10 record and their third consecutive loss to archrival Navy. It’s their worst record since 2002, and one of their wins came against an FCS team (Lehigh) that went 3-8.

Biggest Shoes to Fill: QB Zach Abey was still an important hammer that Navy used in Ken Niumataolo‘s triple-option attack. The senior scored 15 TDs, almost double the number scored by any other individual player, and Navy is going to need to find another hammer now that he’s graduated.

Key Player: The good news for Navy is that team captain QB Malcolm Perry, Navy’s dynamic senior playmaker, returns for his senior campaign. The Clarksville, Tennessee native has rushed 2,342 yards in his career, the eighth most in school history, and is closing on other career Navy rushing leaders like RB Napoleon McCollum. It’s unclear whether Niumataolo will keep using Perry in the same way, having someone else take up Abey’s role, or whether Perry will be used more to finish drives, but nonetheless it should be exciting.

Fearless Prediction: Navy seems pretty hungry after losing three straight to Army, and are implementing some significant changes in order to get back towards winning Commander-In-Chief trophies and bowl eligibility. It’s likely that their success or failure will hinge upon how those changes are executed.