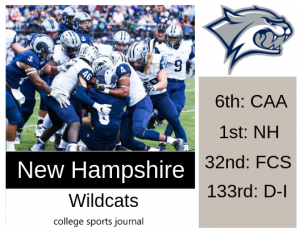 2018 In A Sentence: New Hampshire had high expectations for 2018 that came crashing down to Earth with an awful 1-6 start to the season. The Wildcats bounced back with a couple of nice wins over Villanova and James Madison, but the damage was done early.

Biggest Shoes to Fill: QB Trevor Knight and WR Neil O’Connor finished excellent Wildcat careers in 2018. O’Connor finished his career with 235 catches, 3117 yards and 19 touchdowns. Knight threw for 6345 yards and 48 touchdowns. 2017 was their most lethal year together but injuries put a damper on their senior seasons. 2019 may be tough for the Wildcats without these two on the field.

Key Player: As Knight and O’Connor finished their college careers, RB Carlos Washington was just starting his. As a freshman in 2018, Washington led the team with 585 rushing yards and 6 touchdowns. He will be counted on even more in 2019 and could threaten the 1000 yard mark.

Fearless Prediction: New Hampshire got a taste of life after Trevor Knight in 2018 and it wasn’t good. Look for the Wildcats to miss out on the playoffs for the second straight year after 14 straight appearances.