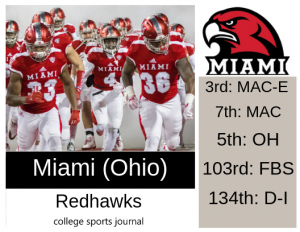 2018 In a Sentence: The Redhawks were again inconsistent–much like the full Coach Martin tenure. Miami finished 6-6 overall (6-2 MAC) but just missed out on a bowl game bid as one of the four teams that were bowl eligible but failed to get the call.

Biggest Shoes to Fill: QB Gus Ragland earned Second Team All-MAC honors in 2018 with 2,547 passing yards, 17 touchdowns, and five interceptions as he also added seven scores on the ground. He started 28 career games for Miami, winning 16 of those starts. Through his career, he threw for over 6,300 yards and 56 touchdowns. Following his graduation this past spring, he was hired by Notre Dame as an offensive analyst.

Key Player: QBs Jackson Williamson and AJ Mayer are battling for the starting position to replace Ragland. In Miami’s spring game, sophomore Williamson went 3/11 for 45 yards and a touchdown while also rushing for 32 yards and a score. Meanwhile, redshirt freshman Mayer went 6/9 for 42 yards and a TD. The battle is expected to continue into this fall came. Whoever wins should be planning on experiencing some growing pains as a first time starter but as with many teams the quarterback is the key position for this team.

Fearless Prediction: It all comes down to quarterback play and if Miami is able to get steady play out of that position, a bowl game isn’t out of the realm of possibility especially given its MAC scheduling . Expect the Redhawks to get to that six-win total and get to a bowl this year.