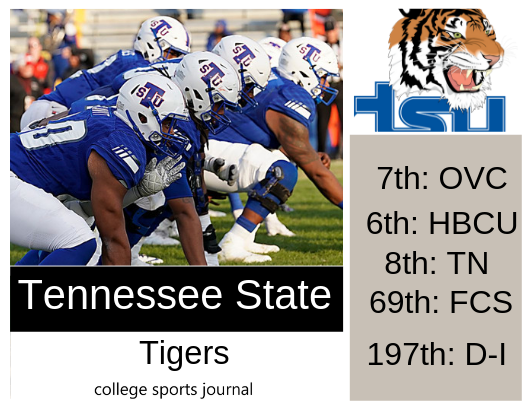 2018 In A Sentence: Tennessee State had two winnable games cancelled by weather leading to a 4-5 overall record. The Tigers really struggled on the road, going 1-4 in 2018, and a numerous amount of injuries also played a part in their disappointing year.

Biggest Shoes to Fill: WR DeVon Johnson was the Tigers’ big play receiver last year, averaging 18.1 yards per reception and scoring six touchdowns overall. His ability to take the top off the defense kept opposing safeties from crowding the line of scrimmage for fear of getting beat deep.

Key Player: QB Micheal Hughes had a decent season in 2018, in 7 games in which he appeared. He will need to protect the ball better this year, having thrown seven interceptions in his seven games in 2018. But Hughes had a good completion percentage at 62%, so cutting down on mistakes could mean immediate improvement for the Tigers offense

Fearless Prediction: Tennessee State’s ceiling is a .500 record, but they can make some noise in a four game home stretch in October to keep themselves relevant through the middle of the season. Any surprising run to the OVC Championship would involve winning on the road against the likes of Eastern Kentucky and Jacksonville State.