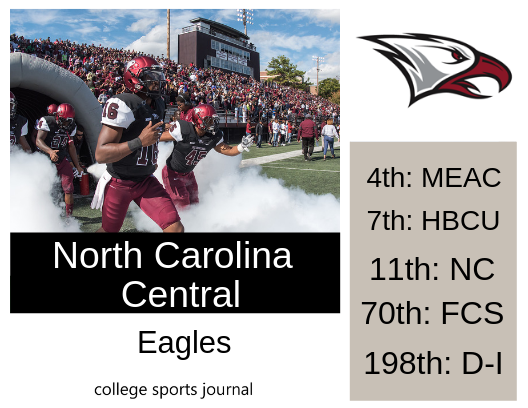 2018 In A Sentence: Few schools had a more confounding season last year than NCCU under interim coach Grant Eastman. After a 1-3 start, the Eagles stunned Howard 40-35, dominated Norfolk State 36-6, then inexplicably lost to one of the worst teams in the MEAC, Delaware State 18-13. A 5-6 record, with two wins against non-Division I opponents, saw the exit of Eastern and the hiring of former NCCU player and assistant coach Trei Oliver, who was last on Southern’s staff as the defensive coordinator on a resurgent Jaguar squad last year.

Key Player: In last season’s finale vs. South Carolina State, QB Dominique Shoffner came in after halftime and rallied the Eagles from a 17-0 deficit to give NCCU a 21-17 win over the Bulldogs, engineering three touchdown drives of over 60 yards. The return of Shoffner and some good skill players on offense highlight a promising unit in 2019.

Fearless Prediction: NCCU made a terrific hire in Trei Oliver, a head coach to finally give the Eagles the stability they’ve needed. With some good young offensive players like Shoffner and some good building blocks returning on defense, look for NCCU to do better than most pundits think. They may not be ready to knock out North Carolina A&T atop the MEAC yet, but give them a year.