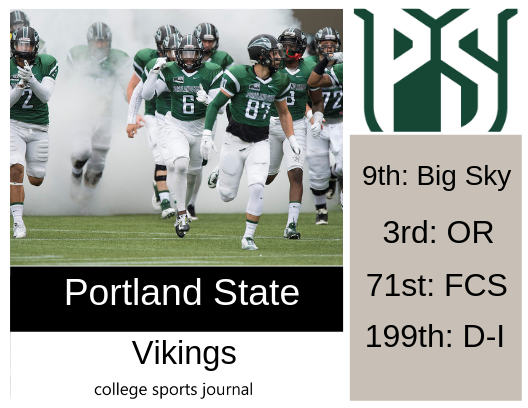 2018 In A Sentence: Portland State is a completely average Big Sky team who cannot close out games. The Vikings have been on a losing season skid since 2015 and have not shown promise outside of impressive recruiting classes.

Biggest Shoes to Fill: Darian Green was Portland’s lead rusher at 470 yards and as a team was fifth in the Big Sky. Next man up is the mentality of players in college football, but will the success be able to be sustained? A strong trio of seniors will have to lead as a community of backs to help train the underclassmen for next year.

Key Player: TE Charlie Taumoepeau is visibly the Vikings’ most dangerous weapon. A 2018 second Team All-American player according to STATS, Hero Sports and Phil Steele, Charlie had 580 yards and five touchdowns in 2018. Taumoepeau is poised for success, as he may be an early player to watch for NFL attention at the FCS level.

Fearless Prediction: Portland State was smart to schedule two games against division two opponents (Simon Fraser University and Eastern Oregon), since that will be half of their wins this season. Southern Utah should be another home win to give confidence to the team at Hillsboro. The toss-up games will be Idaho at home and at Northern Colorado. Key to the Vikings’ success will be the development of Jalani Eason at quarterback, the accessibility of Charlie Taumoepeau, and whether the running back community can string together a dynamic.