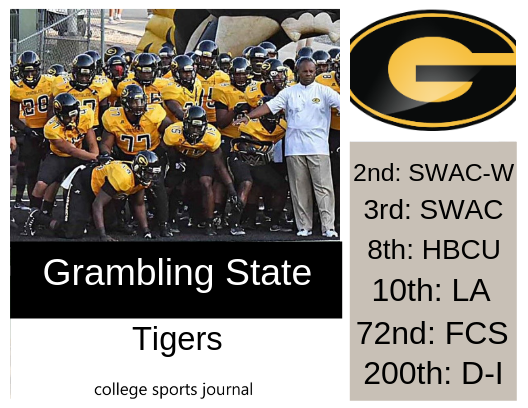 2018 In A Sentence: A promising 2018 season ended up a disappointing 6-5, lowlighted by losses to Prairie View in the State Fair Classic (22-16) and a loss to Southern in the Bayou Classic (38-28). Those two losses kept Grambling from an appearance in the SWAC Championship Game.

Biggest Shoes to Fill: LB De’Arius Christmas was the SWAC Defensive player of the year, with 57 tackles and 12 tackles for loss in the 10 games in which he played. His ability and star power will be missed – he was one of the stars of the Netflix series Last Chance U. when he played for East Mississippi State CC.

Key Player: QB Geremy Hickbottom truly had a baptism by fire last season, named the starter as a redshirt freshman following in the footsteps of QB Devante Kinkade. After a tough 1-3 start, Hickbottom settled into the starting role, going 5-2 the rest of the way with their only losses coming to Alcorn State and Southern. His continued development will be the key to the Tigers’ season. Last year, he ran for 500 yards and passed for 1,945, scoring 22 TDs.

Fearless Prediction: It’s easy to see a bounceback opportunity for the Tigers, even though they lose the center of last year’s defense. Two tough road games vs. Louisiana-Monroe and Louisiana Tech will give way to winnable games against Alabama State and a revenge game vs. Prairie View. If they can navigate those two games and continue the improvement they saw at the end of last year, this season’s Bayou Classic could end up being for the SWAC West representative in the SWAC Championship Game.