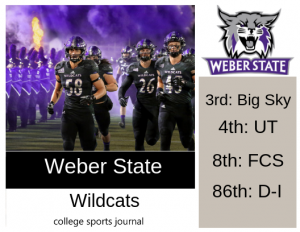 2018 In A Sentence: Despite a terrible passing game, the 2018 season went very well for the Wildcats until they lost a close second-round playoff game. The defense carried the team through tough games such as Eastern Washington and Montana State. Without the help of breakout freshman RB Josh Davis, the Wildcats would not have accomplished as much as they did. Weber State did manage to pull out a first-round win over SEMO 48-23 and a narrow loss to Maine 23-18.

Biggest Loss: LeGrand Toia and Landon Stice will be a disastrous loss for the Wildcat defense as they combined for 159 tackles, 25.5 TFL, 10 sacks, 6 interceptions, 11 deflections, and 3 forced fumbles. The Weber State defense will reload and replace well, but it is undeniable that the pass rush and turnover force will be missed. Last year, the Wildcats were the number one Big Sky defense in the conference and they will need to do a lot to keep that status. Finding a solution to these two monsters graduating will need to be a team effort led by returning star Adam Rodriguez.

Key Player: Adam Rodriguez will need to be a force to be reckoned on defense again to start the season right. With a reloading defense, Rodriguez will need to start with the same intensity as last year to keep the defensive culture strong. Last year Rodriguez tallied 61 tackles, 15 TFL, 7 sacks, 3 deflections, and a forced fumble. Another impact player will be Josh Davis as his true freshmen year at running back fueled the offense last year. Davis had an outstanding year with 1,362 yards rushing and nine touchdowns. Quarterback Jake Constantine can be expected to be improved, but the game plan will likely still rely heavily on the run as Davis is proven and the passing game has not been.

Fearless Prediction: The Wildcats will still be a playoff team, but will not capture a piece of the Big Sky title. An 8-4 season awaits the Wildcats if they can show the same defensive dominance and improve the passing game. Josh Davis will still have a 1,000 yard season, but a target is firmly placed on his back from his recent success. Two FBS games against San Diego State and Nevada will hamper the Wildcats early on as both will be losses. Northern Iowa will be a tough second home game to come back to, but this swing game could determine what type of team Weber State shakes out to be. A big win over UNI could inspire a 6-2 run through the rest of the schedule or shut down their confidence and allow mistakes. The conference schedule is mostly favorable, except traveling to UC Davis and Montana will pose threats to the Wildcat success. UC Davis is still a powerhouse for now and Montana is one of the worst places for opposing teams to visit. With diligence, offensive improvement, and a returning dominance on defense Weber State could be the third place Big Sky team they are meant to be.