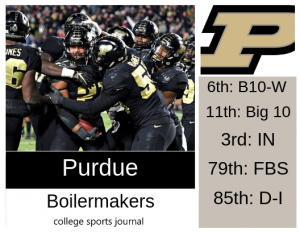 2018 in a Sentence: A very up and down year in Jeff Brohm‘s second season at West Lafayette featured the good (their upset win over Iowa, their season-ending win over Indiana to win the Old Oaken Bucket and get bowl eligible), the bad (home losses to Eastern Michigan and Missouri in back-to-back weeks at home), and the ugly (a 63-14 Music City Bowl thrashing by Auburn).

Biggest Shoes to Fill: QB David Blough was a solid presence on offense for the Boilermakers, throwing for 3,705 yards and 25 TDs. Somewhat surprisingly he wasn’t drafted, even in the late rounds, but he did sign a free agent contract with the NFL’s Cleveland Browns where he hopes to stick as QB Baker Mayfield‘s backup.

Key Player: NG Lorenzo Neal is still recovering from and injury and won’t play in the Boilermakers’ opener, but the son of the longtime NFL fullback of the same name is a 6’3, 315 lb game-changer that when he comes back could really help make Purdue’s defense into a formidable unit. When healthy, he’s a Big 10 first team-level talent that could go very high in the NFL Draft.

Fearless Prediction: The Boilermakers don’t really have much of a rest in their tough Big 10 West schedule – unless you count an away game at Nevada against one of the tougher Group of Five teams. Like last year, Purdue should flirt with .500 and bowl eligibility, and if they can pull off another upset or two, they’ll get there.