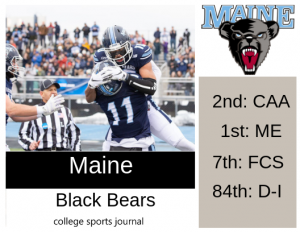 2018 In A Sentence: Maine was the biggest surprise of the 2018 FCS season. The Black Bears entered the season projected to finish 8th in the CAA and went out and won the league outright. Maine reached the semifinals of the FCS playoffs before falling to eventual national runner-up Eastern Washington. The Black Bears also picked up a win over an FCS foe with a 31-28 victory over Western Kentucky.

Biggest Shoes to Fill: LB Sterling Sheffield was the heart and soul of the Maine defense. A four year starter, Sheffield finished his college career with 204 tackles, 21.5 sacks and 5 interceptions. The Black Bears do have a talented linebacker in Deshawn Stevens who had a monster year in 2018, but Sheffield’s leadership will be hard to replace.

Key Player: QB Chris Ferguson had a solid, but not spectacular sophomore season. Maine will need more out of his junior year if they are to repeat their 2018 success. Ferguson threw for 2372 yards and 22 touchdowns, but also completed just 56.3% of his passes and threw 11 interceptions. If he doesn’t clean up the miscues, Maine will fall right back into the middle of the CAA pack.

Fearless Prediction: Maine again looks like a playoff team with high level talent, especially on the defensive side with Deshawn Stevens and Manny Patterson. The Black Bears did lose a large chunk of their coaching staff, so hitting the ground running under Nick Charlton is paramount.