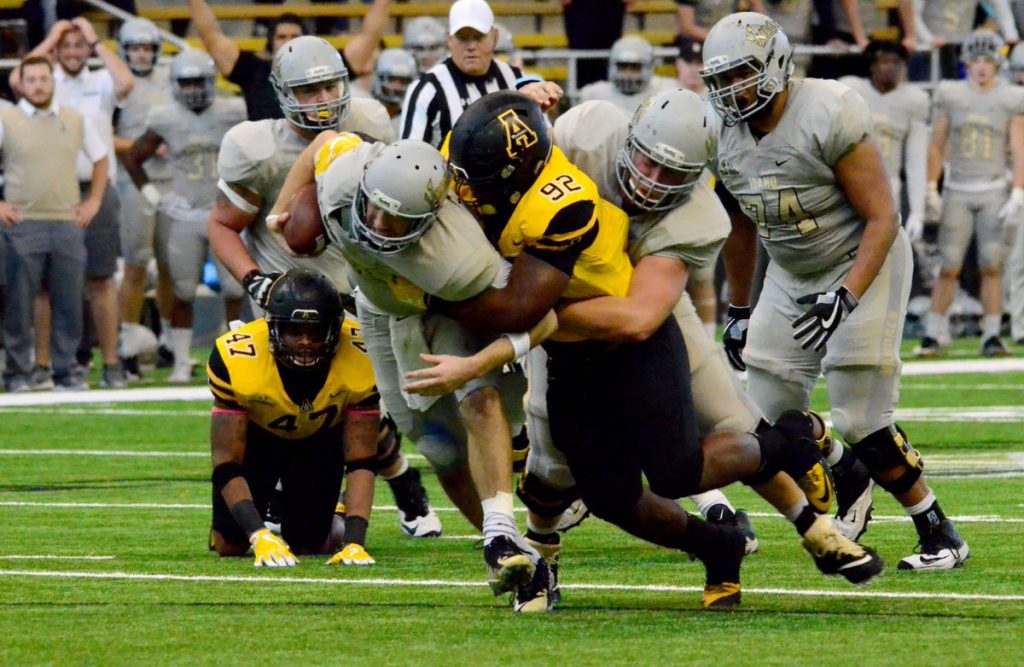 Things had come with only a modicum of difficulty last season as Appalachian State marched to its share of the Sun Belt Conference football championship, but little has been easy about the Mountaineers’ attempt to retain its throne in 2017.

That was illustrated again on Saturday afternoon as ASU rallied from a 20-0 deficit to its 23-20 victory over Idaho.

“What a game,” ASU coach Scott Satterfield said. “It’s not too often you’re part of a 20-point comeback like that. When we started getting that momentum, our defense kept playing, and our offense went and scored. Once we got the momentum, we didn’t let up until we got the lead. It was just a battle.”

App State’s offense was basically missing in action for the first half as Idaho scored 17 unanswered points in the second period and things got even when Lamb was intercepted deep in Mountaineer territory on the first play from scrimmage in the third stanza.

But Appalachians defense came to the rescue as it had for much of the game, holding Idaho to Cade Coffey’s short field goal before Lamb and company finally began to regroup.

Limited to just a pair of first downs in the first half, Lamb found Ike Lewis (six catches for a career-high 101 yards) free behind the secondary for the 38-yard TD aerial that put ASU on the scoreboard seven minutes into the third quarter.

The TD throw came one play after Jalin Moore had scampered for 18 yards on a fourth and two situation at the ASU 44.

“We came out in the second half and throw a pick, the defense held them, and we went right back out on the field and scored,” Lamb said. “That’s a championship team. You’re going to have some of these games, but we’ll try not to have too many of these games. We have to put the work in at practice this week for this coming weekend.”

The Mountaineers showed their sense of urgency on the next possession, converting two more fourth-down gambles into first downs to keep a critical drive alive. Lamb’s six-yard TD toss to tight end Collin Reed capped the 14-play drive to cut Idaho’s lead to 20-13 with 13:23 remaining.

Michael Rubino’s extra point was blocked, but even that couldn’t steal Appalachian’s sudden surge of momentum in the final period.

The Mountaineers, who had turned up the pressure on Vandal QB Matt Linehan in the second half, forced a quick three and out to give the ball back to the offense again and Lamb quickly drilled Lewis with a 45-yard scoring strike.

If the Appalachian defense had been impressive before, it was down right ferocious the rest of the way, forcing fumbles from tailback Aaron Duckworth and Linehan that senior linebacker Eric Boggs was quick to recover. Idaho (2-4, 1-2) managed just 17 net yards over its final six drives.

The Mountaineers finished with six sacks, with defensive end Tee Sims being credited with two and half of them.

The first of those Boggs’ recoveries — forced by linebacker Rashad Townes, who stripped Duckworth at the Vandal 30 — was followed by Terrence Upshaw’s 11-yard rushing burst to set up Rubino’s 31-yard field goal with 8:05 on the clock to give ASU its first lead.

ASU’s defense took care of the rest to close out another tight victory as the Mountaineers pulled out their third conference win in the fourth quarter this year.

Appalachian will return home on Saturday for a 3:30 p.m. game against an old Football Championship Subdivision rival, Coastal Carolina, which is in its first season at the Football Bowl Subdivision level and initial year in the Sun Belt.