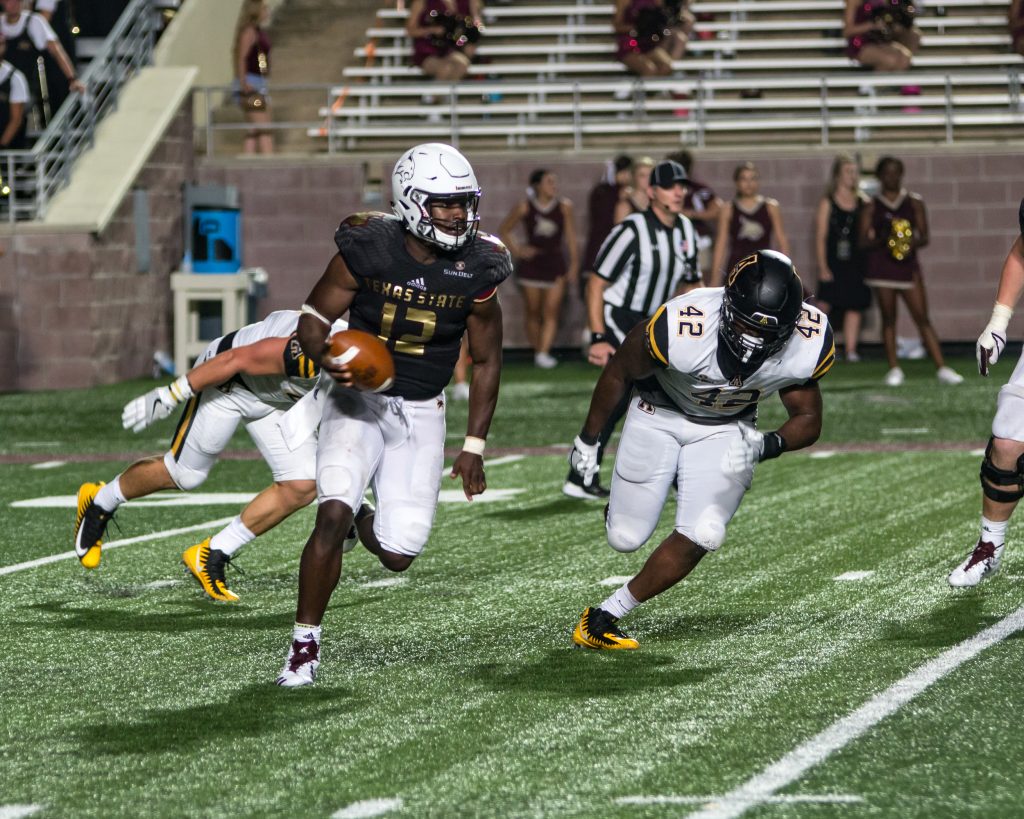 SAN MARCOS, Texas — It isn’t uncommon for a college football team to overlook weaker opponents as it peaks ahead to more important games. But such an oversight on Saturday night nearly cost Appalachian State dearly in its heart-stopping, 20-13 victory over Texas State in the Sun Belt Conference opener for both squads.

Coming in as 22-point favorites in the betting odds, the Mountaineers sleepwalked through the first half, recovered to take a 17-10 lead in the third quarter and then held on as time ran out on Texas State.

With Wake Forest’s first visit to Kidd Brewer Stadium looming next weekend, ASU looked like anything but Sun Belt favorites against a tenacious Bobcat unit that was fired up at home as its coach, Everett Withers, faced the alma mater where he played at from 1981-84, served as Mack Brown’s team captain in 1984 and later coached as an assistant.

Texas State quarterback Damian Williams (23-of-35 for 260 yards and one TD passing, 15 carries for 46 yards rushing) marched the Bobcats 98 yards in the final two minutes, 26 seconds, hitting Elijah King on a six-yard slant play on the game’s final play. But safety A.J. Howard tackled King just short of the goal line and the final 10 seconds of the contest ran out before TSU could get off another snap.

A video review by officials of the last play confirmed that King had failed to break the plain of the goal line and that Williams had not spiked the ball to stop the clock before time expired.

App State (2-1 overall 1-0 in conference) had a chance to put the Bobcats away with under three minutes remaining when quarterback Taylor Lamb made a critical error, fumbling on the read option play while trying to stretch the ball into the end zone on first and goal from the three.

Lamb was hit after a two-yard gain by A.J. Krawczyk on the play and Frankie Griffin recovered the ball for Texas State at the one. In that situation, a third Michael Rubino field goal on the night would have clinched the game.

“For us on the 1-yard line, we fumbled it and gave it to them,” ASU coach Scott Satterfield said. “We told them they weren’t going to go 99 yards. They went 98. It was very, very close, but you have to take these wins any way you can get them.”

Cornerback Clifton Duck put the Mountaineers in position for the clinching score with an interception and his 41-yard return to the TSU 14 three plays before Lamb’s fumble.

Appalachian averted disaster earlier in the fourth period when Lamb ((17-of-28 for 167 yards and one TD passing, five carries for 42 yards rushing) was picked off by Stephen Johnson on a pass Johnson returned to the ASU 30.

But Johnson was flagged for pass interference as he hit tight end Collin Reed early and the Mountaineers converted the second chance into an eight-play, 45-yard drive that ended with Rubino’s 46-yard field goal giving App State a 20-13 lead with 6:48 left.

Texas State (1-2, 0-1) soared to a 10-0 lead with Williams’ 49-yard scoring strike to Mason Hays in the first stanza and James Sherman’s 28-yard field goal in the second quarter.

Appalachian rallied behind Lamb’s six-yard scoring slant pass to freshman Thomas Hennigan before the first half ended and Ike Lewis’ 41-yard kickoff return to open the third quarter set up Rubino’s 27-yard kick to tie the score at 10.

An 11-play, 77-yard march concluded with Terrence Upshaw’s one-yard touchdown plunge on the Mountaineers’ next possession to finally put heavily-favored App State in front at 17-10.

But with Williams continuing to make plays as he scrambled away from heavy Appalachian pressure, that lead was not safe until the clock hit zero.

“They matched our intensity tonight, and I thought it was a very physical contest,” Satterfield said. “I told our guys that this is what Sun Belt football is going to be. It’s going to be physical, and you’re going to have to play this way in order to win.

Texas State out-gained ASU 385-283 in total offense, with the Mountaineers struggling to a 4-of-11 output on third-down conversions.

The Mountaineers will be back in action on Saturday at 3:30 p.m. when they host Wake Forest in the first game of a popular regional series that hasn’t been played since 2001.