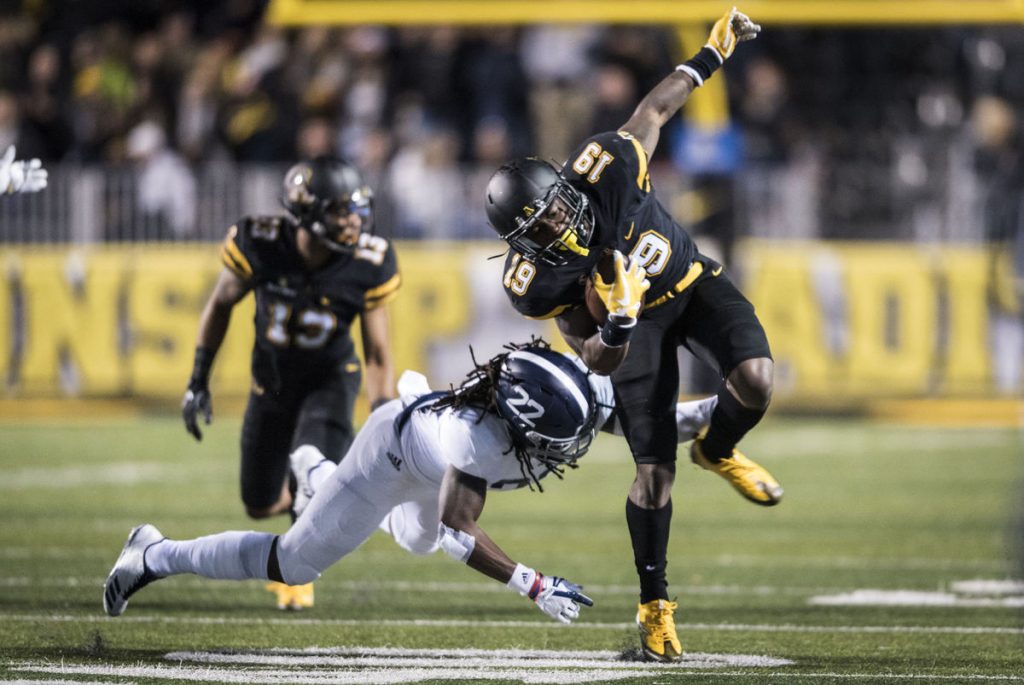 BOONE, N.C. — Just like Elle Woods in the movie “Legally Blonde,” the Appalachian State football team was looking forward to a perfect day Thursday against its arch-rival from Georgia Southern.

Unlike Woods, the Mountaineers pulled off that accomplishment with their convincing 27-6 Sun Belt Conference victory over the winless Eagles before 23,110 fans and a national-television audience on ESPNU in windy and chilly Kidd Brewer Stadium.

The win also made App State bowl eligible for the third year in succession.

“It was awesome to get six wins again, to get the opportunity to get to go play in the postseason especially,” Appalachian coach Scott Satterfield said. “It was real fitting and nice to do it against Georgia Southern our rival team.”

The day got off to an impressive start for ASU athletics with the announcement that 1989 graduate Mark Ricks had made the largest gift in school history, $10 million to the Mountaineers’ coffers.

After falling behind 3-0 at the end of the first quarter, Appalachian (6-4 overall, 5-1 in conference) gradually took control in all three phases of the game and then streaked away with two touchdowns in the fourth quarter to snap a two-game losing streak.

Quarterback Taylor Lamb completed 7-of-13 passes for an efficient 161 yards and scores of 23 yards to tight end Collin Reed and 20 yards to Ike Lewis (three catches for 67 yards).

And Marcus Williams balanced the offensive load with 28 yards carries for 130 yards, showing off the ice bags afterwards on various body parts to illustrate his work effort.

“We ended up with 46 carries and our goal was to get 40, Satterfield explained. “We thought that would give us a great chance to win.”
On defense, the Mountaineers limited the beleaguered Eagles (0-9, 0-5) to 111 yards rushing and 80 yards through the air — 60 yards of that coming on GSU’s final, desperate drive.

It was the first time in the 31-game series that Georgia Southern had been held without a touchdown in 30 years. The last time the normally-powerful Eagle attack had been so throttled by ASU was in the 1987 “Ice Bowl” contest, when the Mountaineers blanked the then-two-time national Division I-AA champs 19-0 in a playoff quarterfinal.

“I’m really proud of our defense and how they bounced back,” Satterfield said. “(It) probably (was) one of the worst performances in the past three years was last week and they came back tonight and really played excellent.”

The special teams got into the act for App State as place kicker Chandler Staton continued his perfect work in the past three games with field goals of 53 and 28 yards and added two extra points.

“It gave us a lot of momentum (heading into the second half),” Lewis said.

Staton’s kick was the sixth longest in school history and the farthest since Mark Wright drilled a record 57-yarder in the home opener against Troy in 2000.

“It was a great experience,” said Staton. “Honestly, (it was) the longest I’ve ever kicked in a game. My previous was 49 yards. I wasn’t sure (if the kick was long enough) by the time it got through I was covered and I couldn’t really see much. It was a solid strike from what I could tell.”

Defensive end Caleb Fuller helped keep a key drive alive near the end of the third period with his 23-yard run from punt formation for an important first down that set up Lewis’ TD catch on the first play of the fourth stanza.

True freshman Daetrich Harrington (11 attempts for 44 rushing yards) capped the scoring with three-yard scoring romp later in the final frame to put the contest out of reach. Harrington gained some much needed confidence after fumbling twice in crucial situations during the Mountaineers’ two-game losing streak.

It was far from a perfect evening for the Eagles, who continue to endure the worst season in school history.

“(Appalachian) played really well, but we did not generate anything on offense,” said GSU coach Chad Lunsford, who was a Mountaineer assistant from 2001-02. “Six points are not going to get it done. We’ve got a lot of evaluation to do. We’ve got to make sure in these next three games that we find that way to get explosive on offense and get some points on the board.”

App State, which is one game back of Arkansas State in the loss column in second place, will have a bye next week before traveling to Georgia State on Nov. 25.

“We’re 5-1 in conference,” said Satterfield. “We are giving ourselves a chance (to defend the Sun Belt title).”