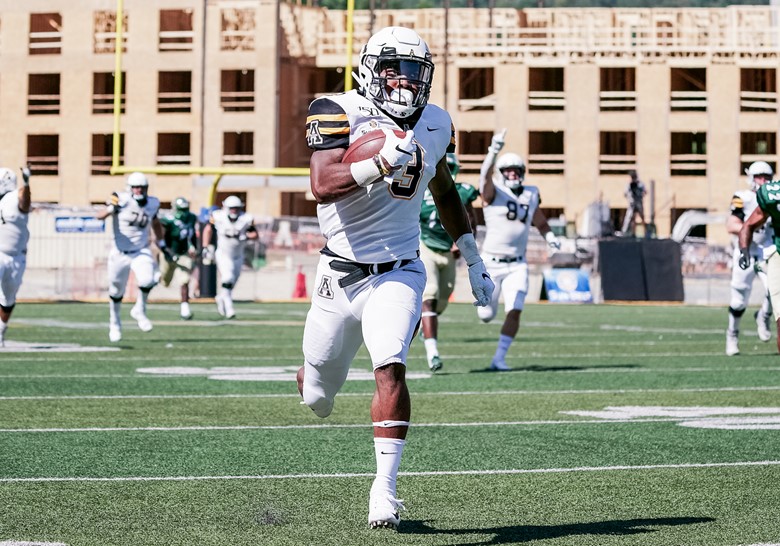 BOONE — As sprinters, Darrynton Evans and Jalen Virgil would make a fine start to building a successful track relay team.

And at Kidd Brewer Stadium on Saturday afternoon, Appalachian State needed all of that speed and more to hold off upset-minded Charlotte, 56-41 in a non-conference football game.

On an afternoon filled with big plays, Evans and Virgil had some of the most significant ones as the Mountaineers overcame penalties and defensive breakdowns to win their second game to start the 2019 season.

Evans bookended the scoring in this wild contest, racing 87 yards on the first play from scrimmage and returning an onside kickoff 45 yards to seal the victory with 3:10 remaining. The kickoff return for a score was the third one of his career, setting a school record.

In between, this junior running back rushed 19 times for a career-high 234 yards and three TDS and finished with 298 all-purpose yards.

Virgil caught three passes for 86 yards, including touchdown receptions of 10 and 73 yards and also a kickoff 45 yards to set up another score.

Appalachian needed all of the offense and special-teams play it could muster on a day where the normally-stout Mountaineer defense buckled behind a multitude of errors, including misalignments, blown assignments and penalties.

“It’s just little things add up to big things,” said ASU senior linebacker Jordan Fehr, who recovered a fumble at the Charlotte 10 that defensive end Demetrius Taylor forced on a sack of Chris Reynolds late in the first half. “We’ve got a lot of corrections to make.”

Appalachian quarterback Zac Thomas (14-of-20 for 182 yards and three touchdowns) feathered a pass into the arms of Virgil on the next play to give the Mountaineers some breathing room at 21-13 just 1:14 before the breakup.

The special teams came huge 35 seconds later when Shaun Jolly blocked a Charlotte punt and DeMarco Jackson turned it into a 16-yard touchdown that made it 28-13.

Those three plays restored some momentum to an App State squad that seemed to be reeling following Chandler Staton doinked a 31-yard field goal attempt off the left upright.

It didn’t help Appalachian that Reynolds played the college game of his life, completing 20-of-31 passes for 296 yards and four touchdowns, much of that damage being done while weathering multiple hits from App State’s fierce pass rush.

The 49ers (1-1) were also energized by 118 yards and two touchdowns on 14 carries from Benny LeMay. LeMay also scored on one of Reynolds’ TD tosses.

“They did a nice job of using their weapons,” Drinkwitz said.

The new Appalachian coach told a skeptical media horde afterwards that he was confident his team would win, despite its struggles.

“There wasn’t any point where I was concerned about losing the game,” Drinkwitz claimed. “We will get things corrected during our bye week and move forward.”

Others among Appalachian’s team seemed more relieved with the gut-wrenching victory as a trip to Chapel Hill, N.C. and the North Carolina Tar Heals await in two Saturdays.

“Thankfully we got the win,” said Fehr. “Our offense played great today.”