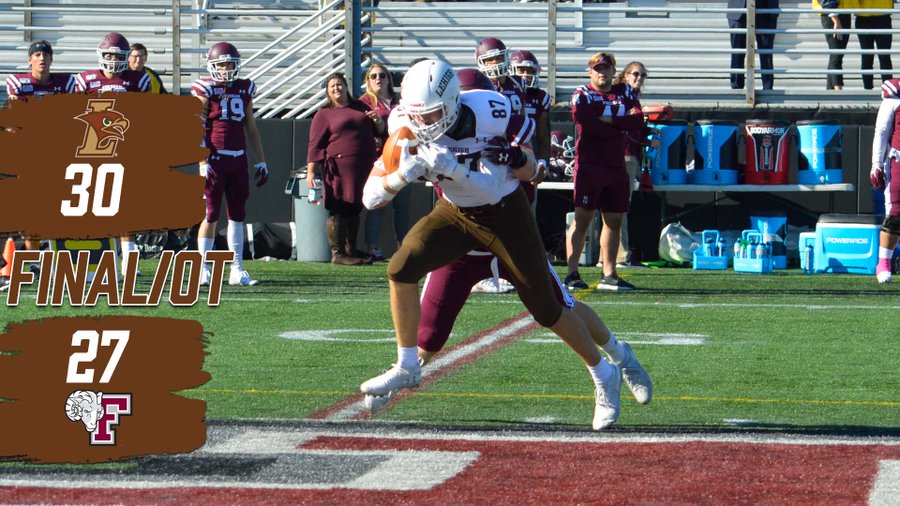 Before the biggest game of the year so far for the Lehigh football program, senior WR Dev Bibbens was left off the depth chart for the Fordham game.

Two weeks ago, the New Hope, Pennsylvania native was leveled by a vicious hit to the midsection from a Colgate defensive back, and he didn’t return in that game.

Even a week later, the coaching staff wasn’t 100% certain he would be healthy enough to play, so they left him off the depth chart as a precaution, even though they still hoped he would be able to participate.

On Saturday, Bibbens didn’t just get into the game – he had the finest game in his Lehigh football career.

“I was able to practice this week, wanted to get back to working,” Bibbens said after the game. “I believe in the work we put in together, and doing things for the greater good. We’re one group.”

He would catch 10 passes for 83 yards and catch two touchdown passes from two different quarterbacks, including the game-winner in overtime to defeat Fordham 30-27 and put Lehigh on top of the Patriot League title race.

It felt like Bibbens and the rest of the Lehigh Mountain Hawks did more than just win a game in the Bronx on Saturday.

It felt like they were up to the moment in which they were placed – a moment that they weren’t supposed to be in in a supposed rebuilding year, in a place where the team hadn’t performed well for many years. They headed to the Bronx with a team full of underclassmen, with a head coach in his first year at Lehigh, with a brand-new system and a team that is still evolving and trying to get better. And they won a thriller of a game that was their third close contest that came down to the very last plays of the game.

Heading to the Bronx this Saturday, there was plenty of painful history to go around for the Lehigh football program to contemplate.

One time, RB Chase Edmonds set a Patriot League record with 347 rushing yards against the Lehigh defense, with 4 rushing touchdowns. Two years later, a fourth-string running back, RB D’Angelo Palladino ran for 297 yards and 3 touchdowns against the Mountain Hawks.

Head coach Tom Gilmore, too, had his share of horror stories as well here when he was head coach of the Holy Cross Crusaders. In 2005 and 2007, a pair of agonizingly close losses of 24-20 and 24-21 helped prevent two very good Crusader teams from achieving Patriot League titles. One loss came from a late interception of QB Dominic Randolph in the final minute to seal the defeat.

So when 5’11 Fordham RB Zach Davis plunged into the end zone after rushing for 51 total yards on a first half drive to tie the game at 7, old-time Lehigh fans might have looked uncomfortably at each other. Davis (185 yards), RB Trey Snead (96 yards) and QB Tim Demorat (40 yards) ended up with a combined 330 yards and 3 rushing touchdowns on the afternoon.

As Fordham played their fast-paced game, however, Lehigh met their pace head-on with a fast pace of their own, And both defenses were up to the task most of the game, forcing punters Austin Henning and Andrew Mevis to punt the ball a combined 17 times.

LB Keith Woetzel was the heart, soul, meat, potatoes, whatever you’d like to call it of the Lehigh defense. He had a monster afternoon, with 13 solo tackles, 4 sacks, and 1 interception.

Interception! Keith Woetzel steps in front of the receiver for his second career INT and Lehigh takes over in Ram territory. pic.twitter.com/FiFQ5oWSpg

It a nip-and-tuck, evenly matched game throughout, with no team leading by more than a touchdown. Both Henning and Mevis connected on critical long field goals – Mevis from 39 yards, and Henning from a career-high of 45 yards – to keep the game close.

It was Bibbens, though, who had a hand in three different touchdowns that ended up being the difference in the game.

His first would come in the waning moments of the first half, on a 3rd and goal. QB Tyler Monaco faded back to pass, and Bibbens made a tremendous fake right, then slant left, where he laid out to catch the ball and came down with it, giving Lehigh a 14-10 lead before going into the locker room at halftime.

Monaco to Bibbens from 4 yards out puts Lehigh up 14-10 at Fordham at halftime.

His second difference-maker came on a record-breaking run by freshman RB Zaythan Hill, a 94 yard run that would give Lehigh a 24-17 lead. Downfield with one man to beat, Bibbens’ textbook seal block gave Hill the final bit of space he needed to complete the scoring play.

This 94-yard TD run by Zaythan Hill puts Lehigh in front 24-17 in the 4th quarter. Longest run from scrimmage since 1998 for the Mountain Hawks.

“On that last touchdown in regulation, Bibbens was blocking their corner for a good 15, 20 yards,” Gilmore said after the game. “Zaythan did a great job, but the reason we scored that touchdown was because of Bibbens. That play, with him blocking on the perimeter, won the game for us.”

The final difference-maker came in overtime, when and injured Monaco gave way to QB Addison Shoup, down 3 after Mevis’ second FG of the afternoon. After a roughing the kicker penalty gave Lehigh three fresh downs, Bibbens became the hero.

“I think as a group, we’ve got closer,” Bibbens said after the game. “We know how to fight as a group. Earlier this year, we had some adversity, but we got mentally tough, and as a group we learned to work together.

With the win, Lehigh looked no longer like a young, rebuilding football team learning how to win.

The Mountain Hawks no longer looked like the type of team that would be bowled over by running back after running back in football games that would give Lehigh fans nightmares.

The team no longer looked similar to those Tim Gilmore-coached Holy Cross teams that were close to being good enough to beat Fordham, but not good enough.

It was a win that put all that history, nightmare, and frustration aside, and felt like a turned corner. It’s now a new chapter for Lehigh, one where they’re 2-0 in the Patriot League and look like a team that might be able to win a championship.

“I’m so proud of these kids,” Gilmore said. “They’ve been through a lot over the last couple of years. We have a lot of young players and there’s a lot of things we’ve had to overcome. I’m really proud of how the kids hung in there. They kept working. They bought in to what we’re doing. I’m really appreciative of that, but I can’t say enough about them and the effort and toughness we’re showing right now.”