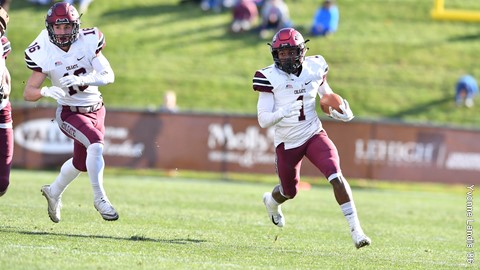 With 9:43 left in the second quarter, it happened.

Lehigh QB Brad Mayes worked his way loose from the pressure of Colgate’s defensive front, and threw a pass where only WR Ray Falcone could catch it in the right corner of the end zone.

And Colgate head coach Dan Hunt didn’t know how his team would react, only up 13-6.

“I knew we would be OK,” he said after the game, “when we tried to block Lehigh’s PAT.”

His special teams unit “went after it”, Hunt said, forcing Lehigh PK Ed Mish to hook the kick left, no good, preserving the seven point Colgate lead and sucking a good amount of Lehigh’s momentum out of Murray Goodman stadium in the process.

“That was huge,” Hunt said. “That was all I looked at – what our effort was going to be. They weren’t feeling sorry for themselves – they were still playing hard. I thought they responded really well.”

And that response would eventually lead to a rout by Colgate over Lehigh, 48-6, as the Raiders would amass 459 yards of offense and outscore the Mountain Hawks 35-0 the rest of the way. The blanketing defense of Colgate certainly kept Lehigh’s offense in check after that play, limiting Mountain Hawks running backs to average only 1.8 yards per carry, and having Mayes only complete four more passes the entire game after the touchdown strike to Falcone.

Attwood Works His Way Into Win

With QB Sage Attwood at the controls, the senior backup that was in the game since regular starting QB Grant Breneman was still having issues with his shoulder, by his own admission it was taking him some time to get in sync in regards to running the offense.

“I haven’t been a starting quarterback for three years, so it did take me until the end of the second quarter,” Sage said afterwards. “After I completed the first couple of passes, I started feeling it and in the second half it showed.”

Those first few passes happened after WR TySean Sizer ran back a punt 56 yards, setting up a short field and a speedy, 3 play, 19 yard drive ending with a 5 yard run by RB Alex Matthews to go up 20-6.

Attwood didn’t complete those passes in the swirling winds on a cold, brisk day at Murray Goodman stadium, but they would eventually happen after the defense held Lehigh’s offense with 49 seconds left in the half.

Attwood would start with completing a nice pass to wide-open TE Mike Bevino for 21 yards across the middle, and then the senior put the ball in the perfect position next to the shoulder of WR Thomas Ives getting to the 1 yard line, his knee coming down maybe a microsecond before the ball crossed the plane of the goal.

The two perfect passes led to a 1 yard run by RB James Holland, one of his three touchdown runs on the day, to give Colgate an unassailable 27-6 lead at halftime.

Holland’s veteran presence was a real stabilizing presence for Attwood and the offense until Sage could get the passing game working. “Our mantra is to run the ball, and stop the run, and we did that really well,” Hunt said. Holland would pace the Colgate rushing attack with 139 yards, while Attwood wasn’t too far behind with 61 yards. Holland would have 3 touchdowns, and Attwood was responsible for 3 more: two rushing and one passing.

After that touchdown right before halftime, it was only a matter of time before Colgate would wrap up their outright, undefeated record in Patriot League play, made just a bit sweeter because it game against a big Patriot League rival and was the last team that had dealt Colgate a loss, back in 2017.

Colgate also hadn’t won at Lehigh since 2012, adding a bit of extra satisfaction.

“What I like about this team is that I know tomorrow, their focus is going to be on Monday’s practice,” Hunt said. “They stay focused on what they need to do, and then they move on. They wanted to finish Patriot League play the right way, and get a win. That’s who they are.”